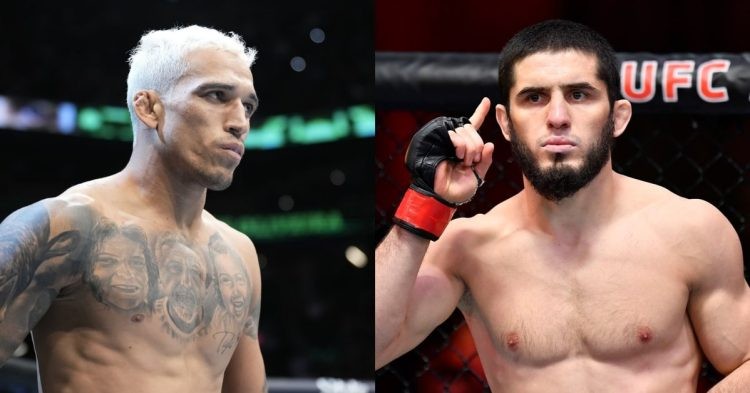 Charles Oliveira already told the fans that he is expecting a war against Islam Makhachev. But, now he has given the fans a prediction on how the fight may end! He will fight Islam in the main event of an insanely stacked UFC 280. The bout will go down on October 22nd inside the Etihad Arena in UAE.

While Makhachev is on a 10-fight win streak, Oliveira has won all of his last 11 fights. So there is no doubt that two of the most dominant fighters will face each other for the top prize of the division. As the fans know, the lightweight belt is vacant because Charles missed weight against Justin Gaethje at UFC 274. Hence, the winner of the UFC 280 main event will be the new 155lbs champ.

Needless to say, there is a lot of excitement regarding the bout. Although Islam is a slight favourite to be the next champ, no one can count out Oliveira. Recently, Charles Oliveira shared his thoughts on the fight. He broke down what Islam’s game plan may be.

Although he expects Makhachev to shoot for takedowns, ‘Do Bronx’ is only focused on his strategy. He also made a bold claim and stated that he will knock out Makhachev pretty early in the fight.

“He won’t come dying to submit me, but rather to wear me out. But man, like I said, I’m not worried about what Makhachev can bring. I’m worried about what Charles can take there. You can be sure it won’t go past the first round.” (h/t via Brazilian MMA Legends)

Can Charles Oliveira knock out Islam Makhachev at UFC 280?

All the discussion regarding the fight has revolved around both of their ground games. While Islam is the most powerful wrestler in the division, Oliveira has 16 submissions in the company, which is the most by anyone in the promotion’s history. So it will be fascinating to see how the bout plays out on the ground. But Charles seems like he is more interested in putting Islam’s lights out on the feet.

Charles Oliveira is an amazing grappler, it is evident by his stats. But he is more than happy to stand on his feet and strike. In his last fight against Justin Gaethje, his power was on full display.

The bout only lasted for 3:22 minutes and that was enough for Oliveira to land some vicious shots against Gaethje. But the punches were so powerful, that it made Justin admit, that he has not experienced anybody with the amount of power Charles has, before.

The Khabib Nurmagomedov protege is nowhere near as good of a striker as Gaethje. So Charles may have a much easier time landing against Islam at UFC 280. So it will be interesting to see how Makhachev handles himself if he gets rocked.

The fans have seen Islam getting finished inside the Octagon before. Can Charles Oliveira do the same on the biggest stage possible? Only time will tell.