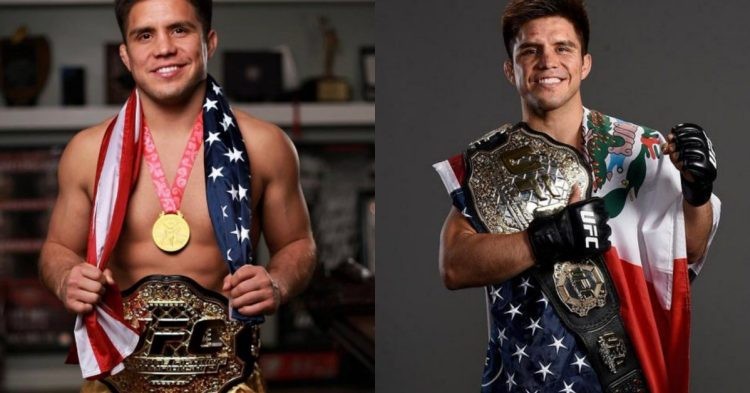 Henry Cejudo has his roots in Mexico. (Credit: Twitter)

Henry Cejudo is in the conversation to be one of the best combat sports athletes of all time. Born on February 9th, 1987, Cejudo has achieved feats in his career that very few have. Not only is he one of the very few UFC double champs, but Cejudo also won an Olympic Gold Medal in freestyle wrestling at 2008’s Beijing Olympics.

At the Olympics, Henry Cejudo represented the United States of America. However, the current UFC 135lbs champ Aljamain Sterling has recently called Henry a “fraud.”

In a recent fan interaction, Aljo took a jab at Cejudo for a recently surfaced video where Triple C claimed that fans would never catch him with the Mexican national flag. Cejudo’s comments are from Friday Night Fight Night with Kari Lake. However, there are images online where Cejudo is posing with a Mexican flag.

The biggest fraud to ever win a UFC title 🤣 Own who you are. Don’t be a scumbag! https://t.co/xMIfJTfYDP

Cejudo’s manager Ali Abdelaziz recently revealed that Henry will fight Aljo for the bantamweight title. The bout will probably take place in the coming year, 2023. Ahead of his much-anticipated return, let’s take a look at Cejudo’s nationality and his religious views.

What is Henry Cejudo’s nationality?

As previously mentioned, Henry Cejudo represented the United States of America during his appearance at the 2008’s Olympic games. Henry’s birthplace is Los Angeles, California. During his appearance on Friday Night Fight Night, Cejudo clarified his stance on the nationality debate. He revealed that both of his parents are Mexican immigrants.

The 35-year-old spoke about how he needed government assistance during his childhood for his essential needs. Although Cejudo does not hide his Mexican heritage and speaks fluent Spanish, Triple C identifies as an American. Since his birth, his mother brought him up to be an American. Cejudo has chased the American dream all his life and cherishes American values.

Cejudo and his fiance Ana Karolina gave birth to a baby daughter. To show his love for the country, Henry Cejudo named his daughter America. So Triple C has made it clear where his allegiance belongs to. But, he showed no disrespect to his Latino roots. Henry also wrote a book in 2011, called ‘American Victory,’ which highlights his life story and his win at the Olympics.

On the occasion of Memorial Day in 2019, Cejudo shared a beautiful message on his Facebook page to thank the veterans who have served the country in uniform. So it is clear that Henry Cejudo is a Mexican-American, whose parents immigrated to the US. Henry was born in the country and clearly identifies as an American.

Henry Cejudo does not talk about his religion in detail. However, a report from Dreshare suggests Cejudo is a devoted Christian. He does thank God in some of his social media posts. In an Instagram post to share his daughter’s birth, Cejudo stated his gratefulness to God for blessing him with a beautiful daughter.