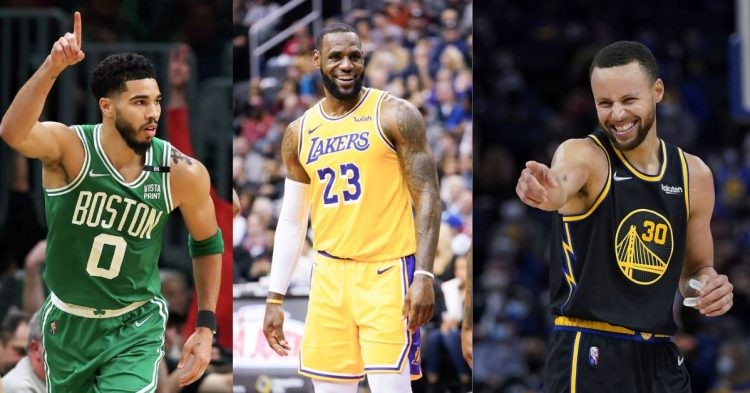 The 2021-2022 NBA season was a thriller that ended with Stephen Curry and the Golden State Warriors winning the title. They managed to eliminate Jayson Tatum, Jaylen Brown, and the Boston Celtics in 6 games. This marks the 4th NBA title in Steph’s career with GSW.

It has been an action-packed season and postseason. We all know the NBA regular season usually has 82 games. However, this season had only 72 games followed by the playoffs. One must wonder which players scored the most points last season.

Most points scored in the 2021-22 season (reg. season and playoffs combined):

The list includes points scored in the playoffs. Therefore, star players that were eliminated early or did not make the playoffs will not be included in this list.

JT and the Celtics were struggling midway through the season. However, they rallied and made a dominant push for the playoffs and finished as the second seed in the Eastern Conference. Boston eliminated the Brooklyn Nets, Milwaukee Bucks, and Miami Heat to make the NBA Finals thanks to their young core of Tatum and Brown.

Jayson had solid scoring numbers this season. He averaged 26.9 points, 8 rebounds, and 4.4 assists. Additionally, he shot 45.3% from the field and 35.3% from the three-point line. These are perhaps, the best numbers he has put up in his career so far.

NBA fans are likely to be confused why Curry is ranked quite low and LeBron James is not even in sight on this list. After all, we have all heard that the King’s scoring in year 19 is next to none. However, the reason LeBron is not on the list is that he missed too many games with injuries this season.

The stat refers to total points scored, not points per game or an average. Therefore, LeBron may have led the way in ppg this season with 30.6 points Be that as it may, he does not make the top 5 on the list as he played only 56 games this season. On the other hand,  Steph Curry is tied for 5th with Trae Young. We are all quick to forget that he was injured heading into the playoffs and played 64 games this season. Thus, he fell down to the 5th spot on this list.