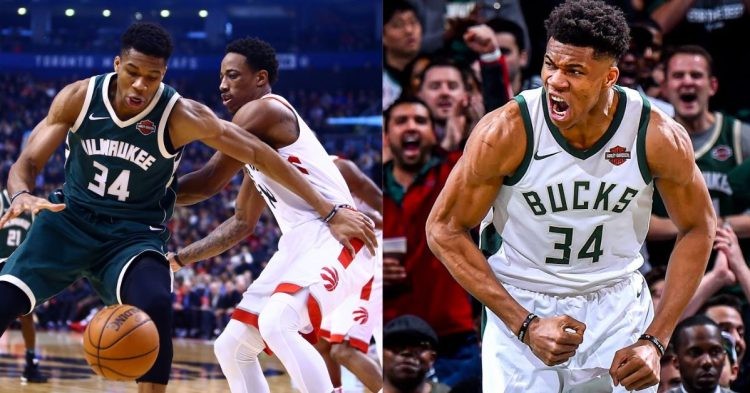 In the long history of the NBA, there have been many players who have been legendary from day 1. Such names includes the likes of Kobe Bryant and LeBron James. One player of the current generation that is working his way towards that status would be Milwaukee Bucks star Giannis Antetokounmpo. The Greek Freak is one of the most dominant players in the NBA right now.

Giannis has only won one title in his career, given his talent and skill, there is a high chance he goes for more NBA rings. Many players have shown admiration for the Greek, and Chicago Bulls’ star DeMar DeRozan is one of them.

On the Old Man and the Three podcast, DeRozan spoke about what makes Giannis so special and different from others. He said, “In comparison to being in the East for so long before I went to San Antonio, playing against Giannis and seeing the development to where he is now, it’s incredible. It’s remarkable the effort that you see he put in to want to be great.”

“It’s something that, as a basketball fan and spectator, I look at a guy like Giannis, or if I’m someone else who’s trying to make it, let me see how dedicated he was, because when he first came into the league, he’s just a skinny kid, you will push him around, didn’t know how to play basketball, but there was something there,” DeMar added.

One of Giannis’ most admired qualities is his hunger to win. He came from humble beginnings, and has often revealed in the past that he didn’t have many pillars of support. Despite all the obstacles, the 27-year-old still managed to become one of the best players in the NBA. He knew that he had to put in the work for that to happen and that’s exactly what he did.

DeMar also mentioned, “But a lot of people have something there, that don’t necessarily means they find it, but for him you can tell the dedication and how bad he wanted it, even to this day, you can just say how bad he wants it.”

“You can see it physically, his demeanor, when he go out there on the court he’s a f*****g killer. Every time. As a basketball fan, you gotta respect that, and you know, being able to compete against him, you see why he won the MVP, he’s one of the most dominant players in our league without a doubt.”

Antetokounmpo has won two NBA MVP awards(2019 & 2020) in his career so far. And there is no doubt that he deserved both of them. Together with that, he also won the 2021 NBA title with the Bucks. As DeMar said, he is one of the most dominant players we have in the NBA currently and he is on the path to make that title his own at this rate.