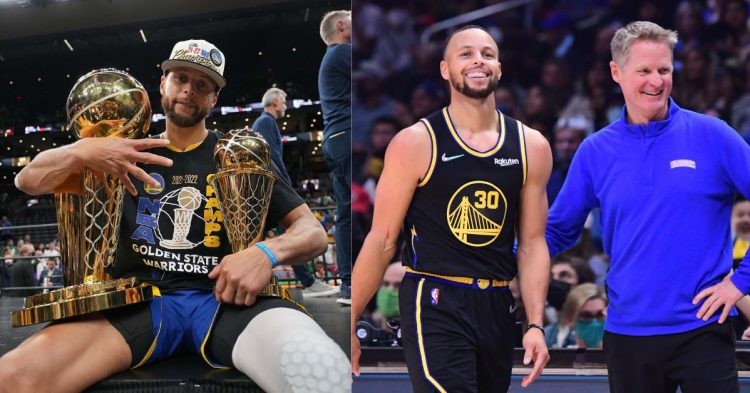 In the NBA, we haven’t had many players who have achieved what Stephen Curry has. Although many of his haters may disagree, he is arguably one of the greatest NBA players, among the likes of LeBron James, Michael Jordan and many more.

2022 has been illustrious for the American so far. He won his 4th title with the Golden State Warriors, and also graduated from Davidson while having his jersey number retired at the institution. If all this wasn’t enough, he also won his first-ever Finals MVP trophy. Many may wonder where Steph found the motivation for all this. Warriors head coach Steve Kerr has an interesting take on it.

On the Ringer’s Real Ones podcast, Kerr said, “Well, you got to understand, the guy is a killer. He’s a killer and people always look at him as the joyful guy. He’s knocking down these half-court shots and shimmying, but he’s an absolute killer. But with Steph, if you don’t really know him, you may not understand his competitiveness.
And two years of not being in the playoffs and multiple years of people saying, well, he’s never won Finals MVP.”

“He used every bit of that to motivate himself, as great players tend to do. And he was on a mission all last year, and I think once the playoffs started, he realized, we got a shot here and he was especially in that Boston series boy he was locked in,” Steve added.

The whole community misunderstands Steph massively. The reason for that may be because Curry has performed against every one of the teams. In addition to that, he is currently one of the most successful active basketball players. Sometimes when you’re too good that many fans want you on their team, you may receive hate. Despite all that he has accomplished in the past season, fans still write him off.

Similarly, the world claimed that Steph was finished as an NBA player when the Warriors missed the playoffs two years in a row. And when the time came this year, as they welcomed their star players healthy and ready to go, the Warriors really made it work. And there is no surprise that Curry was crucial for that.

Moreover, as Kerr mentioned, he used the haters as motivation to fuel him up for the title win this year. He has had many dominating performances in the finals so far, but could not win the Finals MVP. Just because of that, there was a large group that hated on the 34-year-old.

It seems like Steph let his game do the talking on the court. In the 2022 NBA playoffs, Steph averaged 27.4 points, 5.9 assists and 5.2 rebounds in 22 games. And as Kerr said, he was “locked in” against the Boston Celtics in the finals as he truly dismantled them with a 43-point game in Game 4.