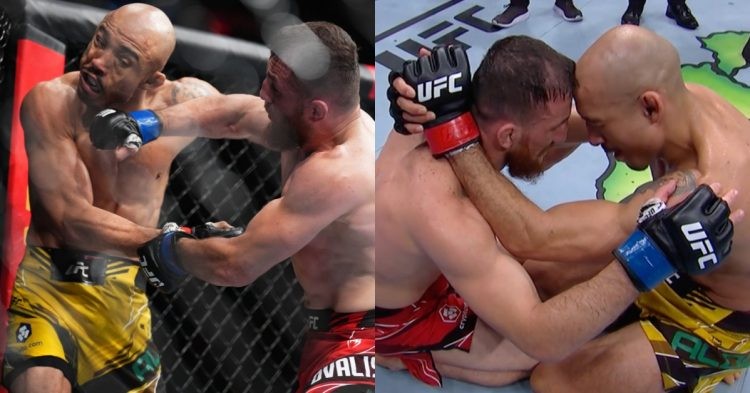 Jose Aldo returned to the Octagon at UFC 278 and fought Merab Dvalishvili on the main card of the PPV. Ahead of the fight, Aldo was on a 3-fight win streak, taking on Merab was on a roll with 7 back-to-back wins. Someone’s win streak had to end and was Merab who ended Aldo’s win streak in a dominant performance.

Known for his aggressive wrestling, Merab opened the fight with a big head kick. He shot for the first takedown at the 3:31 minute mark of round 1. Although he did not get Aldo down, Merab certainly caught the attention of the Brazilian fighter. Dvalishvili also seemed determined to bring Jose out of his shell to catch him with a big punch. But Jose was compact throughout the majority of the first round.

But the round ended with Aldo blitzing forward to land some big shots and it encouraged Merab to swing for big punches as well. Merab maintained the intensity in round 2 as he pressed Aldo to the fence right away. Despite not getting the takedown, Merab landed some decent knees in the clinch to maintain control.

Every time Aldo broke the clinch, Merab went right back to the position. Aldo finally got the fight to the middle of the cage with only a minute left in the round. Although he landed some strikes, he ultimately had no answers for Merab’s constant pressure and persistent takedown attempts.

Merab landed a decent punch to open the final round. Aldo was visibly tired at the beginning of round 3. His movement seemed very laboured and the Georgian fighter’s takedown attempts made him very stationary. Jose was very worried about being taken down and it significantly compromised his striking. But to his credit, Aldo was never taken down.

Merab Dvalishvili paid his respect to Jose Aldo after the fight. He especially applauded Aldo’s takedown defence. Despite double-digit takedown attempts, he was unable to take Jose down to the mat.

Nothing but respect between Aldo and Dvalishvili 👏 #UFC278 pic.twitter.com/kc7JTbp11H

But he got his hand raised after the fight regardless. Following the contest, veteran commentator Joe Rogan asked Merab about his aspirations to fight for the belt. But Merab refused to fight the current champ Aljamain Sterling

“He make me who I am today. Yes, I have a 7-fight win streak because of Aljo. Yeah man, I’m living in my dream right now and only guy beat me is Aljamain Sterling. He’s beating me every day. That’s why I’m strong and I’m tough. Please don’t ask me anymore this question. We’re not fighting each other, we are brothers, okay?”

Merab Dvalishvili and Sterling are training partners. They have also been best of friends for a number of years now. Aljo even stated that he will step away from the division just to let his friend fight for the belt. So it remains to be seen what the UFC does with Merab next.