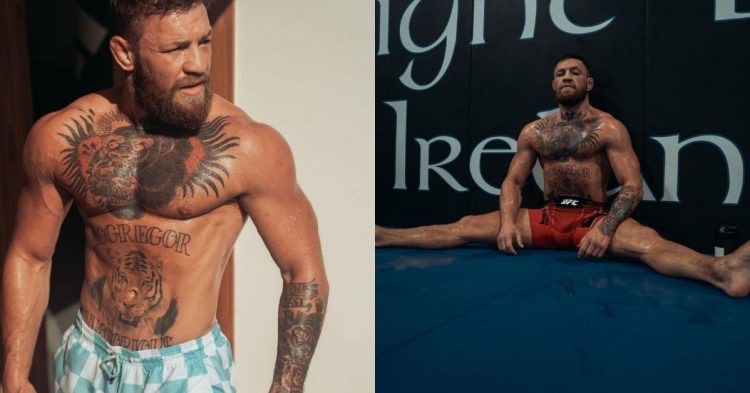 Former UFC double champ Conor McGregor is recovering following his horrific injury last year. In 2021, Conor went up against fellow lightweight Dustin Poirier in their much-anticipated trilogy. But the bout, unfortunately, ended when Conor snapped his ankle in the first round of the fight.

Fans have been wondering when Conor may return to the Octagon after missing more than a year due to an injury. Previously, UFC President Dana White stated to the press that the company was looking to book Conor for a fight later in 2022. But it ultimately did not happen as Conor’s injury did not heal in time and McGregor went on to sign a major Hollywood movie.

In a recent interview with MMA Junkie, Tim Simpson, Conor’s manager, gave a very positive update on his return to fighting. Simpson stated that McGregor is working extremely hard in the gym for return. Simpson also revealed that The Notorious One will return sometime in 2023 and gave an important update on his injury.

“He’s still on track for a big return next year, but this fits in perfectly in the meantime… The leg is still healing. I think there’s a little bit more to go on that, but he’s been training like a madman twice a day, every day.”

“He’s got his full team out there: the McGregor Fast team, all his health and fitness guys, physio, boxing, coaching. He’s been going hard. He’s been training super hard. He’s in amazing shape – just final adjustments to get that leg back where it needs to be.” (h/t via BJPenn.com)

Who will Conor McGregor fight upon his UFC return in 2023?

Conor McGregor is, without a doubt, the biggest star in the UFC right now. He not only attracts the biggest PPV buys regularly, but fighting him does wonders for his opponent’s career. For example, Nate Diaz’s career was drifting before taking on Conor at UFC 196.

They fought twice and Nate Diaz became one of the biggest PPV draws in the company. So was the case for Khabib Nurmagomedov and Dustin Poirier. Hence, all the fighters in the division will be lining up to fight him.

So we’ve got the 170lb Jamaican British Leon. We’ve got the 185lb Nigerian New Zealander, The Stylebender Izzy, and we’ve got the Czech Samurai, Jiří Procházka. Gis a bell I’ll be out at sea for the next what, 40 seconds then I’m back. Quick rip. Call me anytime – Heavy shoulders https://t.co/KyWixYWKQI

So a lightweight title shot on his return is certainly a great possibility. He has been hinting at it repeatedly on Twitter. But lightweight is not the only division where he wants to win gold. Conor even wants to win the belt in the welterweight division.

Recently at UFC 278, Leon Edwards knocked out Kamaru Usman to become the new 170lbs champion. With Leon not being a wrestler, will the UFC try to book him against McGregor if Leon retains his belt in the rematch against Usman? Only time will tell.