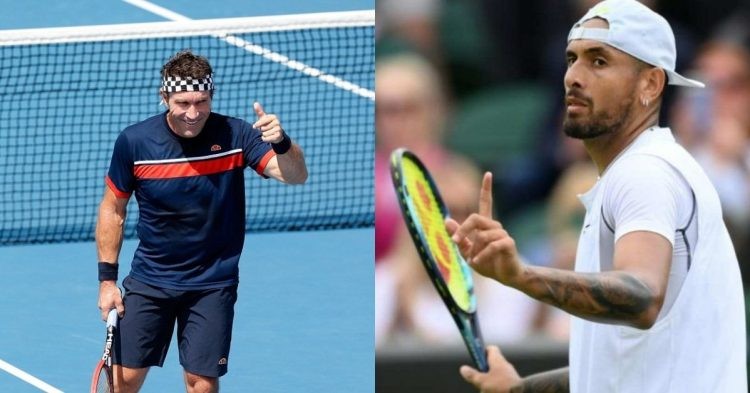 Former Wimbledon champion Pat Cash has taken a dig at Nick Kyrgios for his on-court behavior during his match against Stefanos Tsitsipas. As per Cash, Kyrgios is single-handedly taking down the reputation of the game. He went on to accuse the fellow Australian of cheating and manipulation.

Moreover, Cash said, “He’s brought tennis to the lowest level I can see as far as gamesmanship, cheating, manipulation, abuse, aggressive behavior to umpires, to linesmen.” The match between Kyrgios and Tsitsipas was high in intensity with the two players taking shots at each other.

For the unversed, Tsitsipas hit the ball into the crowd out of frustration and almost hit one spectator. The chair umpire gave him a code violation by the chair umpire. However, Kyrgios demanded a default on his opponent. The incident got more heated when Tsitsipas later approached the chair umpire complaining about Kyrgios. Kyrgios went on to win the match in four sets.

Cash feels something Kyrgios’ behavior shouldn’t go unpunished. As per him, the Aussie sometimes goes completely out of the line. Furthermore, he said, “Something has got to be done about it. It’s just an absolute circus. It’s gone to the absolute limit now.”

Wimbledon has now fined Kyrgios $4000 for his unsportsmanlike conduct and constant abuse during his match against Tsitsipas. Tsitsipas will have to pay $10000 for hitting the ball into the stands and almost harming a spectator.

Pat Cash has launched a blistering attack on Nick Kyrgios, accusing his fellow Australian of cheating, abuse and dragging tennis down to new depths. https://t.co/OHg9lwc0LU

However, Cash feels what Kyrgios does in court is very close to cheating. He said, “Tsitsipas would make a line call and he’d go up there and start complaining, he’d be in his face – that’s part of gamesmanship, that’s the sort of stuff he does and I think there’s a limit.”

Cash is hoping for Kyrgios to focus more on his tennis instead of complaining and lashing out at every small thing. He said, “Let’s hope he doesn’t drop tennis there to a lower level than he did on Saturday.” Kyrgios will face Brandon Nakashima in the Round of 16.