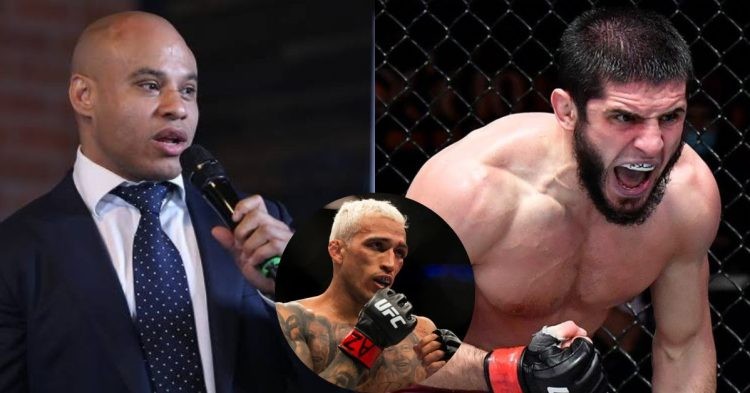 Charles Oliveira will square off against Islam Makhachev for the vacant lightweight title on October 22nd at the Etihad Stadium in Abu Dhabi. This lightweight title clash will take place in the main event of UFC 280.

Just two days after the announcement of this big clash, Islam Makhachev’s manager Ali Abdelaziz appeared in an interview with the Schmo. In this interview, Ali reacted to UFC scheduling the vacant lightweight title fight between Oliveira and Islam and gave an early prediction for this fight.

Abdelaziz made a bold claim that Islam Makhachev will make it look easy against Oliviera. Moreover, he also believes they are on different levels and the Russian lightweight will assert his dominance.

“You know finally, Charles signed the contract. We’ve been waiting. UFC made the right move. Now is the vacant UFC title and you know what Islam is gonna do. He’s gonna play with Charles I believe.”

“He’s gonna play with him. I believe Charles is a very nice kid and come from a humble beginning. But when he get inside the cage Islam’s gonna show a level to this. It’s a level to this.”

It is needless to say that this could end up being Charles Oliveira’s toughest test as it would be difficult to dominate a strong grappler like Islam Makhachev on the ground.

After predicting the outcome of how the fight between Charles Oliveira and Islam Makhachev playout, Ali Abdelaziz heaped high praise on the Russian lightweight’s ground game. Abdelaziz also claimed that Islam is the best grappler in the UFC.

“He’s going to play with him and show there’s levels to this game. Islam is my opinion the best grappler in the UFC right now. I don’t think anybody can get out grab on him I think him and Beneil they are the two best grapplers in the division for sure.”

One could argue that there are better grapplers than Islam in the UFC. But there is no doubt that the Russian lightweight is extremely good on the ground and poses a serious threat when he lands takedowns. A big example is his last three to four fights where he has finished his opponent after taking them down.

Do let us know in the comments section who you think will emerge as the new lightweight champion at the end of UFC 280.