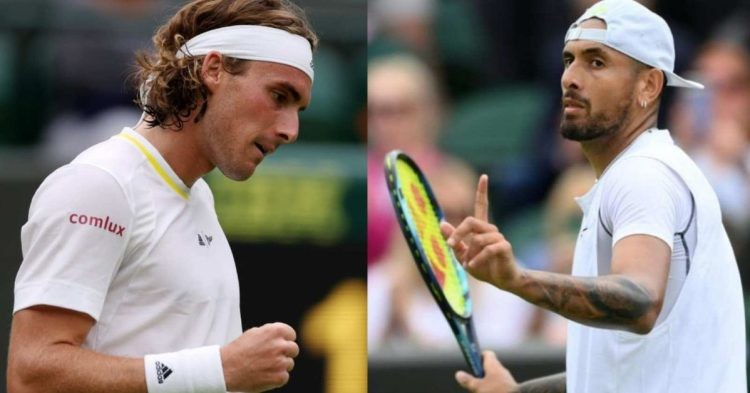 The match between Nick Kyrgios and Stefanos Tsitsipas has gained more eyeballs than the matches of players like Djokovic and Nadal. The match got tense as both the players approached the umpire complaining about the other.

During the post-match conference, Tsitsipas accused Kyrgios of bullying him and other players during matches. Moreover, he said, “Yeah, it`s constant bullying, that`s what he does. He bullies opponents. He was probably a bully at school himself. I don`t like bullies.”

The comment did not go down well with Kyrgios who hit back at his opponent during his post-match interview. He said, “I did nothing towards Stefanos today that was disrespectful. I was not drilling him with balls. To come in here and say I bullied him, that`s just soft. We`re not cut from the same cloth.”

Tsitsipas won the first set but got distracted with all the arguments later on. He lost the next three sets and lost the match. His campaign at Wimbledon ended on a dramatic note and the drama continued even after the match.

Kyrgios has fought with many players on the court. He has that kind of reputation and is not bothered by it. In the interview right after the match, he said he had no grudges against Tsitsipas and keeps his court battles away from personal relationships.

Kyrgios on Tsitsipas: “He’s got some serious issues. I’m good in the locker room, I’ve got many friends…he’s not liked. Let’s just put that there.” pic.twitter.com/L7ufKLHZxY

However, after he got to know about the ‘bullying’ comment, he decided to go all-in against Tsitsipas in the press conference. He said, “I go up against guys who are true competitors. I`ve got many friends in the locker room, just to let you know. I`m actually one of the most liked. I`m set. He`s not liked. Let`s just put that there.”

To Tsitsipas’ credit, he apologized later for his behavior. However, he admitted that he was distracted by the constant talking of Kyrgios. The Greek tennis star also called for some kind of rule to prohibit such kind of behavior.