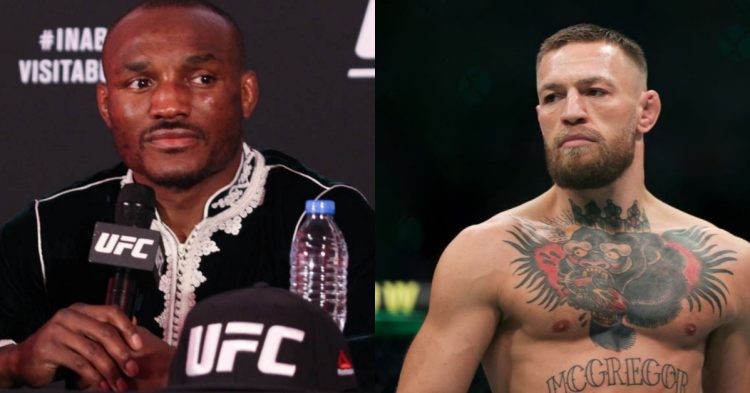 UFC welterweight champion Kamaru Usman gives his verdict on Conor McGregor. Kamaru does not think McGregor is good enough to win a UFC title or fight the elite of the lightweight division.

There has been a lot of speculation lately about Conor’s future in Mixed Martial Arts (MMA). Not only is he one of the richest fighter in the UFC right now, but Conor is also heading to Hollywood. He will make his acting debut opposite Jake Gyllenhaal in the upcoming remake of the 1989 action movie ‘Road House.’ With so much going on outside the Octagon, is Conor done in the ring?

Kamaru Usman does not think so. Usman, who is preparing to take on Leon Edwards at UFC 278, expressed that Conor’s heart is not in the sport anymore. Although he does not think Conor is done with his fighting career, The Nigerian Nightmare stated that McGregor is not a championship calibre fighter anymore.

“He’s not necessarily done, but he’s done as a champion. This is my perspective because when I fight guys, I study their hearts. When I watch fights, I watch their heart and for me, he’s done.” (h/t via MMA Island)

Kamaru Usman will also feature in a Hollywood movie this year. According to reports, Usman will have a role in the upcoming sequel of the Marvel movie ‘Black Panther.’

Conor McGregor is back in training after his leg injury

Former UFC Featherweight and Lightweight Champion broke his ankle against Dustin Poirier at UFC 264. The injury left Conor unable to fight for more than a year or train properly. After major surgery to fix the injury, McGregor has finally started training. Conor’s head coach John Kavanagh recently revealed that The Notorious One is back in training.

Recently, The MacLife uploaded a video of Conor doing some grappling on the mat. He looked significantly bigger in the video and even escaped a guillotine choke attempt from his sparring partner swiftly. Hence there is obviously a desire from Conor to be back fighting inside the Octagon.

However, it does not look like he will fight this year. Despite UFC President Dana White confirming a late 2022 comeback for the Irishman, the chances of Conor actually fighting this year do not look good. There is yet to be an official update on Conor’s recovery. So, sometime next year seems to be the most likely timeframe for Conor to return to the UFC.

Who do you want to see Conor McGregor face upon his return? Do you think he is going to get a title shot right away? Or will he ease into it and take on someone like Tony Ferguson in his return fight? Let us know in the comments down below.