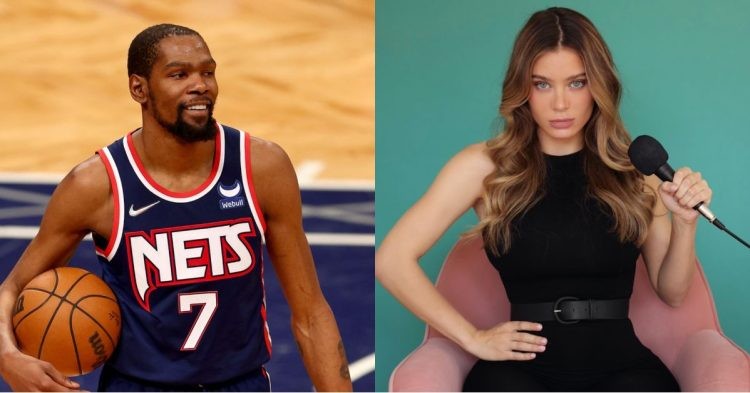 Kevin Durant is one of the few NBA superstars who are still single and unmarried. This has caused the NBA media to constantly speculate on his relationships. Lana Rhodes is a popular adult film star rumored to be dating Durant.

Even the media doesn’t usually fabricate stories out of thin air. Rhodes certainly admits that she went on a date with the NBA star. She also explains what went wrong and why the relationship never moved forward.

Celebrities and high-profile people seem to get together and break up constantly. There could be several reasons why Lana was uninterested in KD. People are always gossiping, and hungry when it comes to news like this. Therefore, it is important to understand what happened. At least from her perspective.

Lana Rhoades claims Kevin Durant is not spicy enough for her

The adult film star broke down what happened on her date with the NBA star to the media. One can only imagine what Lana’s dating life has been so far and how much her career allows it. In any case, she explained what went wrong on her date with Durant. We only assume it is KD as she never openly admitted it herself.

“The guy who invited me also invited one of the other girls and this isn’t the first time that this has happened to me. That’s where I’ve been invited on a date and they also invite a backup option… We ended up leaving dinner, not because of that situation but because at that point you’re already friend-zoned.”

Rhoades went on to describe the interaction further, ” I don’t give a fu*k who you’re talking to, the date was really boring… I don’t wanna be mean, but me and this guy just didn’t click. And I’m like what’s your favorite this, what’s your opinion on this, and he was just like, I don’t have opinions on anything. I don’t have favorite anything and he was serious and he wasn’t just saying that to shut down the conversation. He’s not spicy enough for me.”

We should certainly hope that this story isn’t too accurate. If it is, KD certainly needs to work on his game and approach when it comes to this part of life.