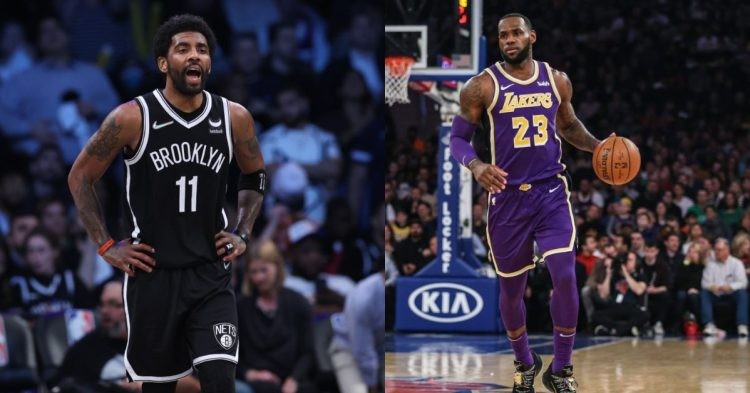 Brooklyn Nets star Kyrie Irving recently appeared as a guest on “The Shop“. There, alongside Maverick Carter and others, he discusses several issues. Irving is widely considered one of the most talented and eccentric players in the league. LeBron James, his former teammate defended him after his appearance on the show.

We all know about the history between King James and Uncle Drew. They were part of a dominant Cavs team that made the NBA Finals 4 years in a row. However, they soon fell apart and Irving moved on to the Boston Celtics and LeBron, the Los Angeles Lakers.

Though it has been several years since they played on the same side. James still delivered high praises for Irving. It is important to know what he said and the context of the situation.

People can still make up or be on good terms after initially falling out. We saw Kobe Bryant and Shaquille O’Neal do this many years after parting ways as teammates. It is the same case for LeBron James and Kyrie Irving. We will never truly know why they didn’t weather through their differences together.

NBA analysts claimed that Kyrie felt he was under the shadow of LeBron and felt suffocated. This would certainly be true to some extent. There has always been a sense of pressure on the teammates of King James. “Bron’s gonna trade you” is a chant that some audiences use to rattle the King’s teammates.

In any case, we assumed Irving left because he felt that his legacy was getting overshadowed and discredited thanks to James. They seem to have remained on good terms several years later. Here is what LeBron said on Twitter after Irving’s interview.

“ He’s truly so misunderstood! I love seeing his growth as well throughout the years! Always believed and knew he was so much more and deeper than just a phenomenal basketball player.”

He’s truly so misunderstood! I love seeing his growth as well throughout the years! Always believed and knew he was so much more and deeper than just a phenomenal basketball player! #TheShop @uninterrupted

Not many of us are familiar with who Kyrie is as a man and what he truly believes in. We see what he wishes to show us and judge him for it. LeBron clearly knows him better than most of us and his assessment of Irving should be given value.