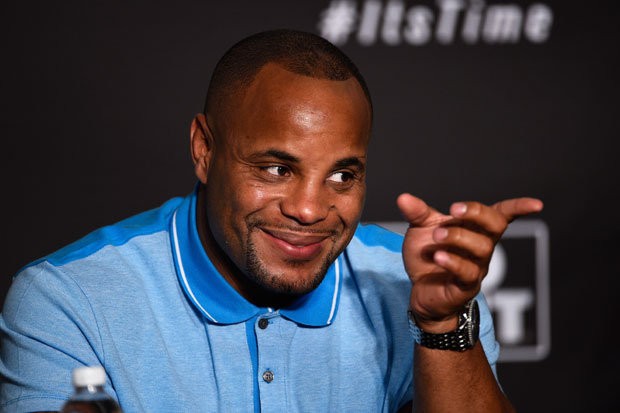 UFC 261 weigh-in show featured former UFC fighters Daniel Cormier, Din Thomas, UFC analyst Laura Sanko, and Dan Hellie. UFC as a sport has grown leaps and bounds in the last few years. And UFC is putting some serious efforts into entertaining the fans even during the weigh-ins.

The weigh-in show for UFC 261 was full of some exciting games and activities. Daniel Cormier, Laura Sanko, Dan Hellie, and Din Thomas played mini-golf, picked their best fighters from each division, and a lot more. And during the mini-golf game, Daniel Cormier was caught cheating again.

Read More: “I would kill him”- DC warns Jake Paul

DC’s towel story during the weigh-in for Anderson Silva is fight is well known to the MMA fans. When UFC strawweight Liang Na used the box to make the weight for her fight against Ariane Carnelossi, Daniel Cormier stated:

When Liang Na lift her hands which is mandatory as the new guidelines from the commissions, DC seemed surprised. To which, Laura Sanko replied with a hilarious dig. She said:

“You know why they made those rules, maybe certain people were leaning.”

But as always DC showed good sportsmanship and joked about it by saying: “Don’t do that. I will not let you assassinate your character. Sometimes your eyes lie to you. You should listen to your friends. You better be careful Lauro Shenko.”

Well, not too long after that DC chated again in the mini-golf games as well. He moved the ball closer to the cup.

Daniel Cormier has certainly made a huge impact in his role as an analyst after entertaining the fans in the octagon. Cormier is one of the best in the business when it comes to calling the fights despite the criticism he got for the fight between Israel Adesanya and Jan Balchowicz. And with three UFC titles on the line, with Rose Namajunas taking on Zhang Weili, the fans might expect some screams of “Thug Rose” from Daniel Cormier at UFC 261.