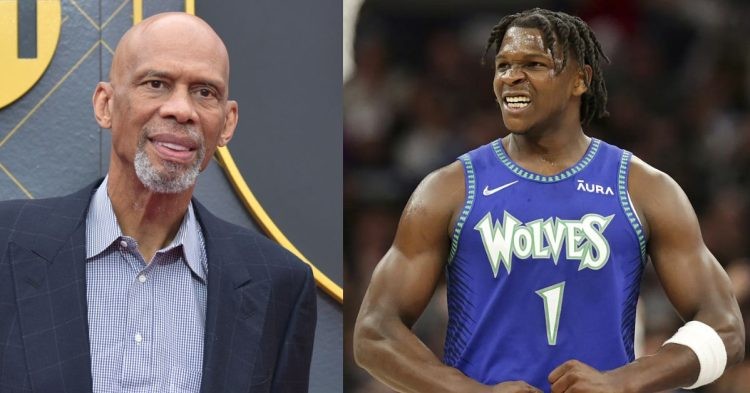 The young Minnesota Timberwolves star Anthony Edwards made the news this NBA offseason. But not in a good way. Ant-Man shared an Instagram story where he filmed members of the LGBTQ+ community and made derogatory statements. They were along the lines of “Look at these queer as* ni**as… look what the world done come to.”

He soon realized the repercussions of his impulsive actions and deleted the video. Additionally, Anthony Edwards also sent out an apology to the LGBTQ+ community for the potential pain, his actions may have caused. Furthermore, the Timberwolves organization condemned the act and criticized Edwards.

Be that as it may, NBA legend Kareem Abdul Jabbar recently spoke out on this issue. He explained why he felt the Timberwolves star’s apology is meaningless. It is important to understand the context of Jabbar’s perspective in order for us to form our own opinion.

Kareem is still quite outspoken despite being retired. When interviewed, he discussed why Ant-Man should not be easily forgiven.

“It would be easy to dismiss Edward’s immaturity. He’s only 21. If not for the fact that we’ve seen so many cases of famous athletes and owners in the news spouting racism, misogyny, and anti-LGBTQ+ sentiments”.

Those who are familiar with current news will know Jabbar is drawing reference to Phoenix Suns owner Robert Sarver who has been suspended for workplace misconduct. However, it is unfair to compare something Anthony Edwards shared on his social media platform to what Sarver did with his fellow employees. Moreover, Robert Sarver was punished for years of racist and sexist behavior. Not one isolated incident.

“If he can’t do that much to undo the harm he’s caused, then his apology is meaningless.”https://t.co/wBB6jDPfRm

In any case, Jabbar went on to describe what he felt would be a suitable alternative for Edward’s actions instead of a simple apology, “ Edwards needs to repair the damage with some voluntary community service with the LGBTQ+ organizations, particularly youth groups, to show his support. If he can’t do that much to undo the harm he’s caused, then his apology is meaningless”.

We should wonder how much to agree with the retired NBA legend. There is no way he can insist Ant-Man do something and try to call it voluntary. At the end of the day, Edwards apologized presuming that the LGBTQ community was directly affected by his statements.

Since we don’t know who was really hurt, it is difficult to tell Anthony what type of community service to engage in and who was really affected. Perhaps Jabbar is just on a short string with the recent events in the NBA.