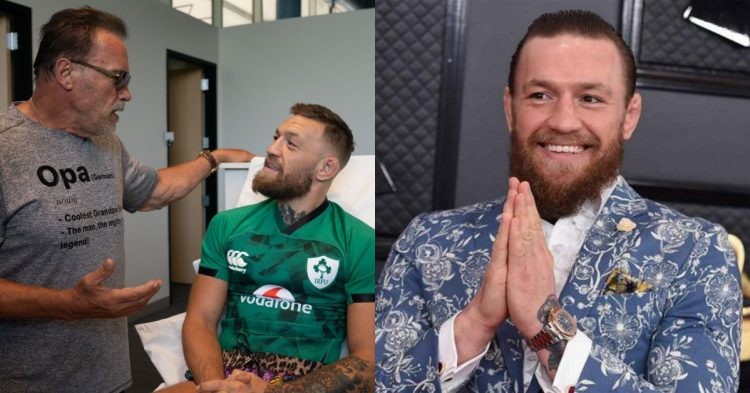 McGregor suffered a serious leg injury last year in 2021 and had to use a wheelchair for a long period of time. During his recovery, he ran into the former mayor of California who wished him luck in his recovery. McGregor used a picture of their meeting at the time in the birthday post. He also made a reference to the recent news of his acting debut in the post.

I’ll be back!
For the sake of humankind!
I must return! 🦸‍♂️
Happy birthday my man, @Schwarzenegger! Hope you and H are proud of my recovery / work and my latest move on the board.
Fun times ahead, bring it 🦿❤️ pic.twitter.com/v7z2Fppn9K

The Notorious One also made a reference to Arnold’s famous movie franchise ‘Terminator’ in his tweet. Before becoming an actor and politician, he was famous for his bodybuilding skills. It was how he originally found his fame. He became a source of inspiration for many and Conor was no different. With his new acting venture, he is now following in the footsteps of his idol.

McGregor also gave a shoutout to Arnold’s girlfriend, Heather Milligan. Heather is a well-known physio who has had a working relationship with McGregor since 2013. Conor had an ACL tear in 2013 and Milligan helped him with his recovery. She also played a crucial role in Conor’s rehab after UFC 264 when he broke his ankle.

Conor McGregor will make his acting debut later in 2022

Much like Arnold Schwarzenegger did previously, Conor McGregor is also starting a new chapter of his life later this year. Reports came out recently that he will have a leading role in the upcoming remake of 1989’s ‘Road House,’ alongside Jake Gyllenhaal. It seems like Conor is very excited about the project and is eager to take over Hollywood.

McGregor has accomplished everything that he wanted to in MMA and UFC. He became the first-ever fighter to hold two separate belts in two different weight classes simultaneously. He also holds the honour of being a part of some of the best-selling PPVs in the company’s history.

However, his recent form is nothing to write home about. He has lost 3 out of his last 4 UFC bouts. Then the injury has also taken another year away from his career. However, Conor has recovered from the injury and according to his coach, McGregor is slowly getting back into the groove.

But, it does not seem like he will be fighting anytime soon. Conor has many other businesses outside MMA which keep him occupied. Maybe at the age of 34, it is time for the former UFC champ to focus on other ventures and step away from the Octagon for good.