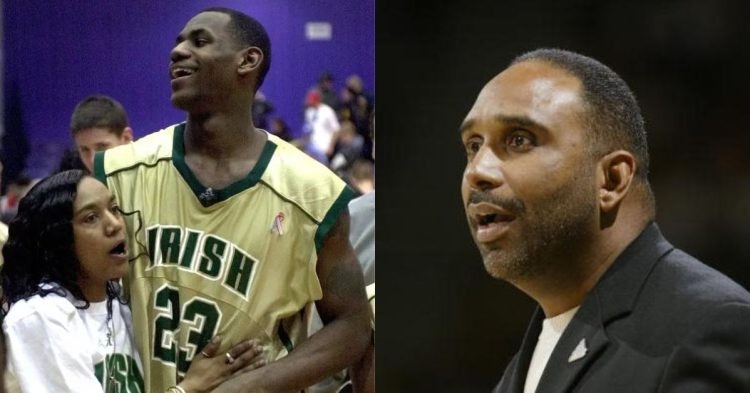 LeBron James, his mom and his former coach (Credit- Twitter)

LeBron James has had an impressive NBA career. He first came into the sports world’s radar during his time in high school. Dru Joyce II was his coach, mentor, and more during the early years of his life. He played a significant role in the development of King James. Moreover, coach Joyce helped him grow as a human being and not just as a basketball player.

Not many people know much about the Chosen One’s background and early life. It would surprise them to know that coach Dru was significantly responsible for Gloria James deciding to let LeBron pursue basketball. One must wonder how this conversation went down and what happened after it.

Dru Joyce lived in Akron, Ohio. This is the same city where LeBron is from. The coach was initially in the field of sales working for Hunt- Wesson foods. He soon decided to move to Akron in 1984 and also had a child at the time named Dru Joyce III.

Coach Dru always had a passion for the sport of basketball and began coaching his son from a very young age. Additionally, he was always on the lookout for talent that he could cultivate and refine into a full-fledged player. Dru knew Akron well. Therefore, he knew where to look for potential players and frequented several community centers and even church groups.

It was through one of the centers, the Summit Lake recreational center, that he got his first glimpse of a young LeBron James, who at the time was only 10 years old. Joyce must have seen something special way back then as he decided to track King James back to his locality near Elizabeth park in order to speak to his family.

Gloria James was not financially well off and her husband was out of the picture. The broken family seemed like one among many in the area and were simply looking to make ends meet. Dru approached her and asked if he could recruit her son onto his American Athletic Union team.

The name of the team was ” The shooting stars” and Joyce soon enticed LeBron with the notion of displaying his talents to the world and proving what he is capable of at a very young age. Gloria was not easily convinced that this was the best decision for her son. After a lot of persuasions and convincing from Dru Joyce II, finally, she agreed but insisted on watching the coach train LeBron in the first session. After all, Gloria James has always been her son’s biggest fan and supported him since the very beginning.

The sports world has benefitted greatly thanks to her. One must wonder what would have happened if Joyce never followed up and decided to track and believe in LeBron. Dru Joyce II is one of the important reasons why King James is the man he is today.