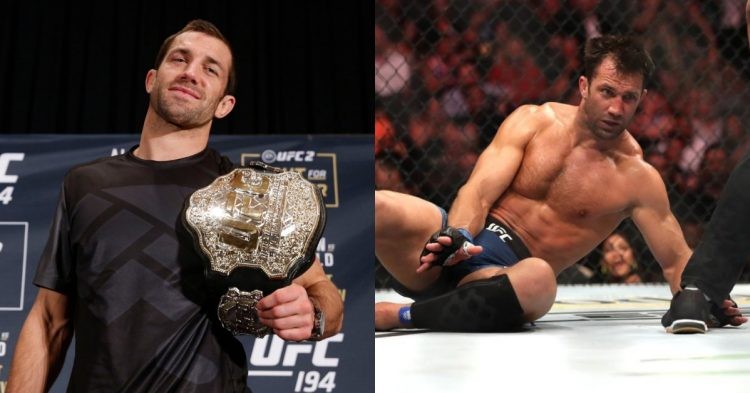 The rise and fall of Luke Rockhold. (Images via Twitter)

Luke Rockhold is one of the most complete fighters to ever compete inside the UFC Octagon in recent years. From possessing great striking skills to having a black belt in Brazilian Jiu-Jitsu, Rockhold is not lacking in any department.

Rockhold was 23 years of age when he started his career in Mixed Martial Arts (MMA). His very first opponent was Mike Martinez at Melee on the Mountain on July 24th of 2007. Luke got rid of Mike in round 1 itself with an armbar submission win. However, he faced defeat in his very next fight via TKO against Tony Rubalcava in November of 2007.

Following the loss, Luke started a great journey which led to a 9 fight win-streak at Strikeforce. The promotion had some of the best talents in the sport at the time and Luke was a big part of it. He beat the likes of Jacare Souza, Tim Kennedy and Keith Jardine in Strikeforce before the UFC purchased the promotion and absorbed its talents.

But his introduction to the promotion was not the best as Luke was put up against Vitor Belfort in 2013. The bout ended disastrously for the former Strikeforce champion as Belfort knocked Rockhold out with the most vicious spinning heel kick that the sport had ever seen.

However, that did not demoralize Luke as he went on another 5 fight win streak. He defeated Tim Boetsch and Michael Bisping in two successive fights before going up against former light heavyweight champ Lyoto Machida. Luke finished Machida in the 2nd round of the fight with a rear-naked choke in 2015 to earn a title shot.

He went up against Chris Weidman at UFC 194 for the UFC middleweight strap. That fight does not get the fanfare it deserves, because the PPV was the co-main event to the featherweight title fight between Jose Aldo and Conor McGregor. Rockhold dominated the fight against Chris and won the fight via TKO in round 4 of the fight.

Fans thought they were in for a long title run from Luke Rockhold after Anderson Silva‘s dominance over the division. However, that was not the case at all as he ended up losing the belt against Michael Bisping at UFC 199. Luke was over-confident heading into the fight against Bisping, whom he had beaten in the past. It came back to bite him as Michael knocked Rockhold out with a left hook.

It, unfortunately, started a downward spiral for Luke. However, he came back against David Branch just a few months after getting KO’ed by Bisping in 2016. He made David tap out to his vicious punches. Luke then had the chance to fight Yoel Romero for the interim title at UFC 221. Although he was succeeding at first, Romero changed the momentum in round 3.

Although Luke tried to recover, Romero swarmed him with punches and knocked him out in the 3rd round of the fight. Following the bout in 2018, Luke came back in 2019 and made his debut in the light heavyweight division. He was plotting a fight against then-champ Jon Jones with a win over Jan Blachowicz at UFC 239.

But fate had other plans as Jan knocked him out cold in the second round of the fight. The KO punch was so powerful that it broke Luke’s jaw. It raised a lot of questions regarding his durability. The fans wondered whether 3 KO losses in the last 4 fights made Luke’s chin weak or not.

Luke did not look the same after his loss to Bisping. One has to wonder whether that particular fight triggered Luke’s downfall or not. His over-confidence may also have played a big part in the horrible setbacks he suffered late in his career.