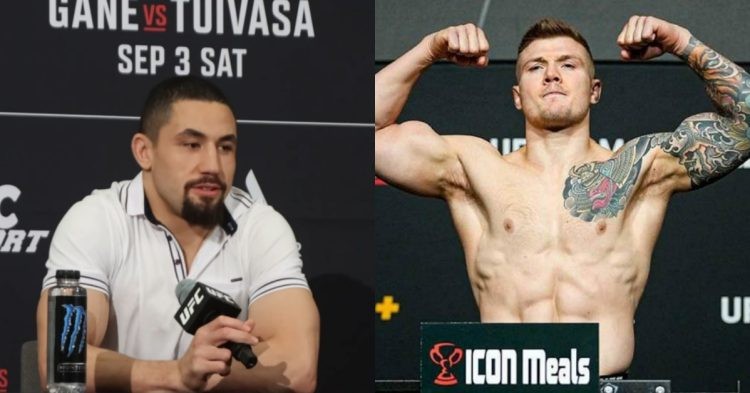 Former UFC Middleweight Champion Robert Whittaker will fight Marvin Vettori at UFC Paris. Ahead of the bout, Whittaker had some interesting comments regarding his opponent this Saturday. In a recent interview, Robert stated that Marvin’s fight style is not sustainable.

Marvin Vettori has had a great record in recent times. In his 12 UFC fights, Marvin has a record of 8-3-1. In his last 6 fights, Vettori has had 5 wins and the only loss came against the champ Israel Adesanya at UFC 263. Hence, there is no doubt that the Italian fighter is amongst the best in the division.

But one stat that the fans have to pay attention to, is Marvin’s striking defence. He has a defence rate of 59% and absorbs 3.48 strikes per minute. In his last 4 fights, Vettori has absorbed 418 strikers. His last bout was against Paulo Costa in 2021 and it was a slugfest at times. Costa landed some massive strikes in the fight which could have been fatal on any other fighter.

But it has to be said that Vettori has a great chin and it has saved him at times in his career. Whittaker pointed that out during the media day for the upcoming event. He was asked about whether or not Vettori made improvements in his career or not. Although he gave The Italian Dream some props, Robert still has questions about his fight style.

“I definitely think he has gotten better. But by how much? You know, he’s gotten better at a style tumble you know, so to speak. It’s very hard to gauge especially when his style relies so heavily on being able to outlast, take the damage than your opponent. How do you get better at taking shots?”

The 31-year-old then went on to describe why it is essential for fighters to improve throughout their career. Combat sports athletes have very short careers. They are always compared with the next best thing. Hence, they always have to be at their absolute best to stay on top, otherwise, there will always be someone else to take their spot.

Can Robert Whittaker win against Marvin Vettori at UFC Paris?

Robert Whittaker vs Marvin Vettori at UFC Paris has a lot of stakes behind it. While Vettori is 2nd in the division alongside Jared Cannonier, Whittaker is in the first spot. So the winner will have a rightful claim on the title next. Adesanya is fighting Alex Pereira at UFC 281. Depending on the result of the fight, the winner will be next in line.

However, for that to happen, someone needs to win. As things stand, Robert Whittaker is the favourite to get his hands raised on Saturday. He is miles ahead of Vettori in terms of striking. But what makes the fight interesting is Marvin’s wrestling pedigree. However, The Reaper has great takedown defence as well.

What are your thoughts on the fight? Do you think Robert Whittaker will win on September 3rd? Or will the fans witness an upset? Let us know in the comments down below.