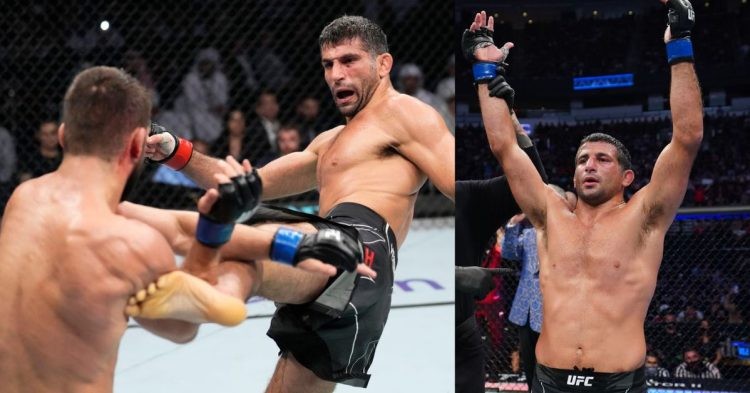 This fight held major significance in the lightweight division as the winner, Beneil Dariush looks set to fight the winner of Olivera vs Makhachev which is about to begin in a few moments.

As many expected the fight started with Gamrot looking for a takedown and kind of got it as well but in that process took a blow on his right ear and started bleeding, although it wasn’t anything to worry about as he looked clean in the second round. Round two unexpectedly was completely opposite of the first one where both the fighters spent the majority of the time standing up and it looked like Beneil Dariush got the better of Gamrot in those striking exchanges.

Round three started in a similar fashion with Gamrot looking for a takedown but unable to secure one due to the safe distance Dariush had created and hence was forced to stand up with a much better striker. Gamrot looked inferior in the striking exchanges and kept lagging behind. With around 90 seconds left in the fight, Beneil Dariush landed a massive overhand left that knocked Gamrot down. Though he was able to get back on his feet and fight out the remaining minute, Gamrot looked completely exhausted and accepted a unanimous decision defeat.

Two out of three judges scored the fight 30-27 in favor of Beneil Dariush while one judge gave the first round to Gamrot scoring the fight 29-28. In the post fight interview, being the nice man Dariush is, he didn’t demand an instant title shot and said he will fight 10 more times if he has to in order to get that belt. Needless to say, that won’t even happen and Dariush is probably the guy fighting for the UFC lightweight title next.

How did fans react to Beneil Dariush’s victory?

How in the world did Gamrot survive that overhand left

There’s a reason the top 5 are the top 5, people talking crap about them being there, because Gamrot and Arman had a competitive match, Dariush showed him levels, neutralized his opponents biggest strength, are had him scared to do his wrestling.
Islam ducked him for a reason