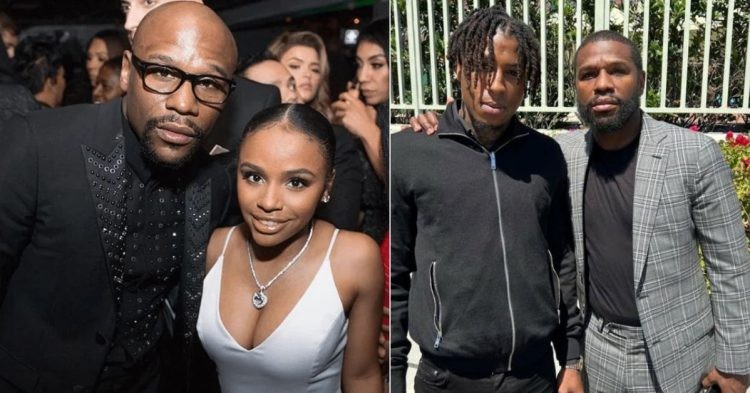 NBA YoungBoy is a famous rapper and musician well-known across the country. His real name is Kentrell DeSean Gaulden and he is about to turn 23 years old. It would interest many people to know that Kentrell is related to world-famous boxer Floyd Mayweather.

Considering that they do not have the same surname, we should wonder how this is even possible. Moreover, they do not resemble each other at all. However, it is undisputed that they know each other and consider themselves family. Thus, it is important to know the exact relationship between NBA YoungBoy and Floyd Mayweather

As you could have guessed by now, Kentrell DeSean Gaulden and Floyd Mayweather are not actually blood relatives. Floyd’s daughter Iyanna Mayweather is the mother of Kentrell’s infant child. Hence, the relationship between Floyd and NBA YoungBoy would be something similar to that of a son-in-law and father-in-law. However, the only difference is that Kentrell and Iyanna have never been married.

NBA YoungBoy has a kid with Floyd’s daughter Yaya pic.twitter.com/YiNfAWpOWm

Nonetheless, this does not change the fact that both of them are now somewhat related simply because of the birth of Iyanna’s child. Floyd is the child’s grandfather and NBA YoungBoy is the father. Therefore, it would be difficult to convince people that these two prominent personalities are not actually related.

NBA YoungBoy’s son learning how to box from his grandfather Floyd Mayweather 🐐🥊 pic.twitter.com/9SIRYrAIe6

When the child was born in January 2021, the couple decided to hide its name and gender initially. However, we soon found out that it is a baby boy named after NBA YoungBoy himself. We do not have any official pictures of the baby Kentrell Gaulden Jr. This is because the family clearly wishes to protect the identity and face of a young child away from the limelight of social media.

Floyd Mayweather was asked about his feelings concerning this whole situation. After all, he was one of the first people the fans questioned when speculating about the potential pregnancy of Iyanna.

“I just want what’s best for my daughter. Always want the best. If that makes her happy, then we’re happy. Me and her mother are happy. But what I try not to do is get in her personal business. Because, once she’s no longer under my roof, then it’s between her and her better half.”

This is quite a balanced and appropriate response from Floyd. He revealed that he loves his daughter wants her happy and respects her personal business. Iyanna should be thankful for having a father like that.