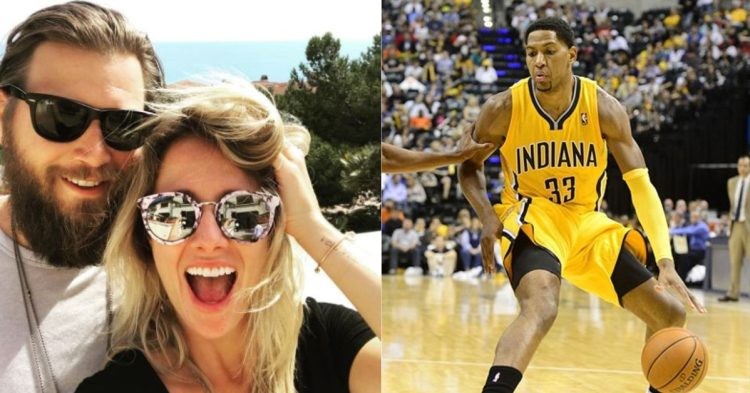 Brittany Schmitt, a comedian has been making serious rounds throughout the internet and social media. Why? mostly for her jokes potentially related to Danny Granger, a former player. She claims to have been in a relationship with him before turning into a Jehovah’s witness. Schmitt’s jokes, albeit somewhat funny were quite risky and could have been easily traced back to her.

At least, that’s what her husband Chris Rutkowski feels. We should wonder what he had to say about the nature of the jokes she was sharing. After all, she is a professional comedian and will be protected by what is said on stage. Perhaps that is why she felt comfortable discussing this private incident on a public platform.

It seems that Schmitt has had quite the past before finally deciding to get married. She has made several references to potential boyfriends and booty calls from NBA players prior to her marriage. Amusingly, she is now using those same relationships as material for improving her career as a comedian.

With that being said, the joke she initially made was referring to an old boyfriend from the league who has now turned into a Jehovah’s witness. To those who are unfamiliar with the term, Jehovah’s witnesses refer to a group of people from a Christian denomination who focus on and believe in the act of evangelism. That refers to the notion of preaching Christianity and trying to influence the rest of the nonbelievers.

According to Schmitt, that is exactly what her previous lover did when he called her out of the blue several years after their relationship ended. While narrating the joke on how this new Jehovah’s witness was hypocritical considering his past actions, she also revealed how her husband warned her about potential repercussions.

“After I wrote that joke, my husband was like babe have you ever googled how many ex-NBA players are Jehovah’s witnesses? I was like no why? and he’s like there’s two.”

Chris was clearly worried her half-hearted attempt at protecting the player’s identity or creating some notion of discretion could easily be broken. However, Schmitt couldn’t have cared less about protecting her past lover. She even went on to identify him for her audience. Brittany told them to google the same and that he was the light-skinned one.

NBA Players that turned Jehovah’s witnesses have caught the internet by storm https://t.co/U4RFZkrp2l

At least her husband tried to protect her or warn her about what would happen if she followed through. But that did not deter her in the end.