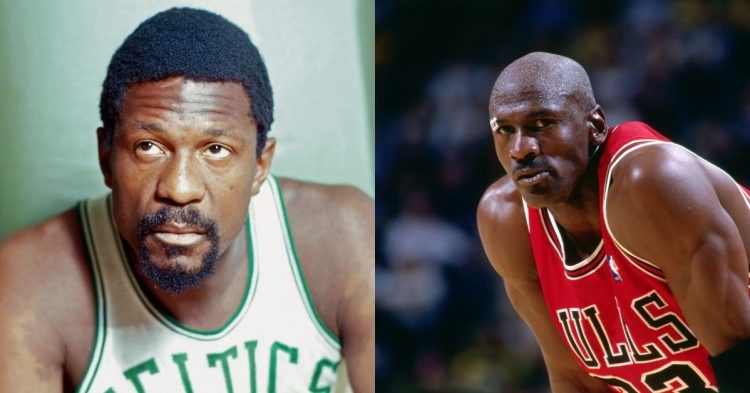 Bill Russell and Michael Jordan are two great generational talents in the NBA. One dominated the league in the 1950s and 60s while the other in the 1980s and 1990s. Several sports analysts think Michael Jordan had a prime like no other. He has managed to three-peat twice with the Chicago Bulls.

A three-peat refers to winning three titles in a row. The only other team that has managed to accomplish this feat since MJ was the Los Angeles Lakers with Shaquille O’Neal and Kobe Bryant. We have an innate tendency to compare and criticize the present players with players of the previous generation. Therefore, one must wonder how Michael Jordan’s career and NBA titles compare to the Celtics legend Bill Russell’s accolades.

Every era of basketball over the years has differed from the last. Whether it be in terms of defensive schemes or offensive playstyle. Simply put, players guarded each other differently over the years as those same players scored differently over generations. One must wonder how drastically the style of play could change over a few decades and when it could have been the easiest era to win.

This is a fatal flaw of NBA sports analysts. Is it even possible to compare greatness from different generations? Some people would believe Steph Curry could not survive in the 80s when physical basketball was quite common. The same people struggle to accept that players like MJ would also thrive in the modern day and dominate just like he did in his prime.

One must wonder how much truth there is to these statements. Is it actually easier to lead a team to an NBA title based on the era of play? In another word, is the era of play a reason why the player is able to dominate and win multiple titles? If the player is taken out of said era and put in another, would he still be effective?

These are all open-ended questions and it is difficult to answer fairly. Bill Russell won 11 NBA titles in 13 years, and Michael Jordan managed to win 6 in 15 years. Yet, MJ is considered the GOAT. Perhaps this could be because MJ played in a league with 30 teams, while there were only 8 teams competing in Russell’s era. They were the Boston Celtics, Philadelphia Warriors, Syracuse Nationals, New York Knicks, St Louis Hawks, Detroit Pistons, Minneapolis Lakers, and the Cincinnati Royals.

It is certainly much easier to win titles if you are one of eight contenders as opposed to one of thirty. This has led several people to discount or try to discredit the championships won by Mr. Russell when comparing him to Jordan.