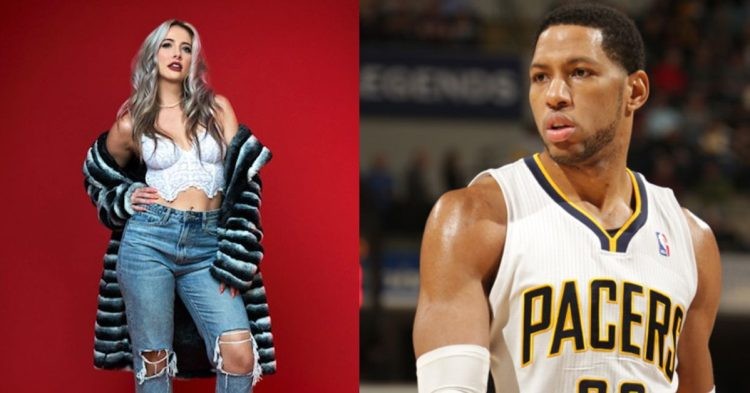 We have been having the conversation regarding Jehovah’s witnesses in the NBA for a while now. It all started when Brittany Schmitt revealed her past with a former NBA player, who was also a Jehovah’s witness. She also claimed that the man was light-skinned. Even with this limited information, fans were quick to find out that it was most likely to be Danny Granger.

Granger is a former NBA player, and a Jehovah’s witness, who currently has no association with the league in any way. His career came to an abrupt end as he retired after ten seasons in the league.

According to statmuse, Granger has played in 621 games in the NBA. He managed to average 16.5 points, 4.9 rebounds and 1.9 assists throughout his career. The American spent majority of his career at the Indiana Pacers. He was with the franchise from 2005 till 2013.

He was so good before the injuries!

Tragedy struck when he faced a significant injury during the 2010-11 NBA season. That year, he only played in 5 games. Granger made sure to bounce the year and played in 62 games for the Pacers. He even put up decent numbers as well. However, that did not carry on for long as he faced another injury once again. This time around, he was away for two seasons. Danny only managed to feature in 16 games in two seasons.

Granger retired in 2015, mainly because of an injury-filled career. He ended his career playing for the Miami Heat in 2015, after signing for the LA Clippers the year before. He was only able to feature in 13 games for the LA-based franchise. As Danny retire, he would have looked back on a career that, thinking “what could have been”.

Danny Granger should retire before he ruins the Pacers

Over the years, we have seen many NBA players who failed to achieve their full potential because of injuries. Despite winning the Most Improved Player award, together with earning an All-Star appearance, Granger could not have a successful time in the league.

Many called for his retirement at the time as they believed he was holding the Pacers franchise back. A fan tweeted, “Maybe Danny Granger should retire #sorehammy”. The hashtag used by the fan shows how they mock Granger for being injury-prone.

However, Granger has made a quick return to the headlines recently. With the help of Brittany Schmitt, he became relevant once again as NBA fans all believe he was the comedian’s ex-hookup. We have not received any official confirmation so far from either parties.