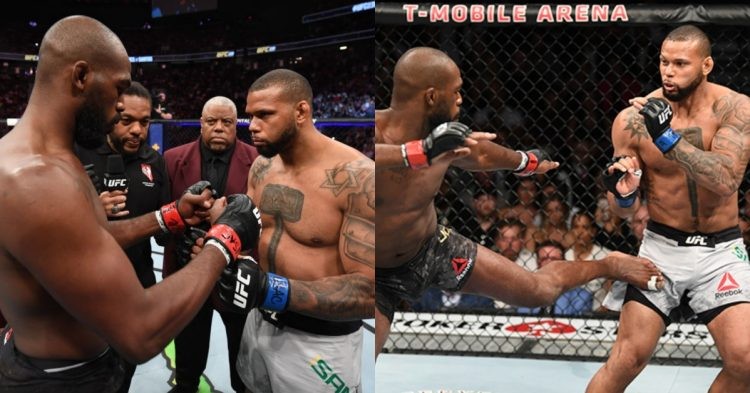 Thiago Santos will be facing Jamahal Hill in the main event of the upcoming UFC Fight Night. He is currently ranked 6th in the division, taking on Hill who is ranked 10th. Although he has been able to maintain a relatively high ranking, Santos has not had a good record in recent years.

So far, Thiago has competed 23 times in the UFC. Although he has lost 8 times inside the Octagon, 4 of his recent losses came in his last 5 fights. However, he was on a spectacular run before that. He had 8 victories in his last 9 fights.

He had victories over the likes of Anthony Smith, Jack Hermansson and Kevin Holland. He also knocked out Jan Blachowicz in a brutal manner which earned him the very first title shot of his career. He took on Jon Jones in the main event of UFC 239 and lost the bout via split decision.

However, the fight had a lasting impact on his career and Santos has not been the same ever since. How did the fight go? Let’s find out.

The bout between Jon Jones and Thiago Santos was a 25-minute back-and-forth tactical fight. Usually, Santos does not focus much on defence and relies on his power to knock out his opponents. However, neither fighter had particularly great output. He landed 43 significant strikes as opposed to Jon Jones’ 59 significant strikes. But, he landed the more powerful strikes.

He is the only fighter to take a score card from Jon Jones as two judges had it 48-47 for Jones, while one had it 47-48 for Santos. Although he lost the contest, he earned the respect of the fans for pushing Jon to the limit. But it cost Marreta a significant portion of his career.

During the bout, Jon’s most effective tool was his oblique kicks. His oblique kicks targetting his opponent’s knee is a very dangerous weapon. The kick hyper-extends the joints and causes serious injuries to the fighter. Santos was no different as he suffered a torn ACL, MCL and PCL on his right leg. According to ESPN, he also suffered a meniscus tear on his left leg.

After such serious injuries, he had to take more than a year off to nurse his injuries. In his comeback fight against Glover Teixeira, it was evident that his mobility was certainly comprised. Although he dropped Glover, he could not follow up and finish the job. He became really defensive which did not suit his fighting style.

At the age of 38, time is rapidly running out and it will be very intriguing to see if he can get back his mobility and start knocking his opponents out like before or not.