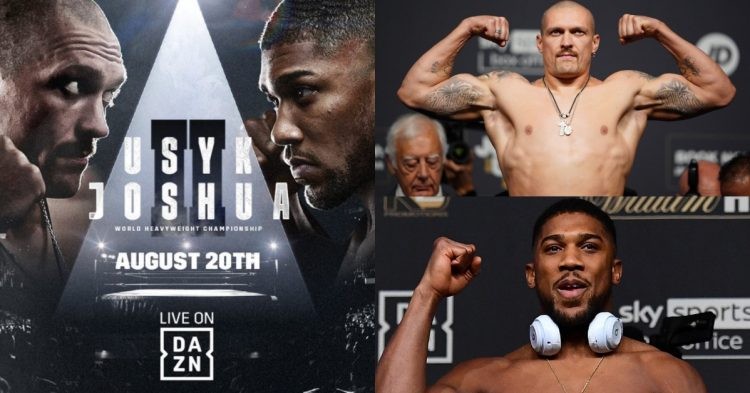 The rematch between Oleksandr Usyk (19-0) and Anthony Joshua is set to go down on August 20th. Then cruiserweight champ Usyk challenged Anthony Joshua, who held the WBA (Super), IBF, WBO and IBO heavyweight belts in 2021. Fans did not give Usyk much of a chance heading into a fight against Joshua, who was a heavy favourite. But to everyone’s shock, Usyk beat Joshua via unanimous decision.

Joshua has not looked the same since his shocking loss to Andy Ruiz Jr in June 2019. In the rematch against the Mexican fighter, Joshua put on a defensive masterclass and regained his belts via unanimous decision. Although he knocked out Kubrat Pulev in December of 2020, the British boxer once again fell short against Usyk in September of 2021.

Although Joshua holds a record of 24-2, he is 2-2 in his last 4 fights. So there are major question marks about his future in the sport. He desperately needs to beat the Ukrainian fighter to retain his credibility in boxing. While he is still a massive star in the UK, that may change if he suffers a loss in the immediate rematch.

As mentioned above, the rematch between Joshua and Usyk is set to go down on the 20th of August. The first bout took place in the sold-out Tottenham Hotspur Stadium in London. However, this time, the contest will be taking place in a neutral venue. This particular fight will take place at the King Abdullah Sports City in Jeddah, Saudi Arabia.

Rest of the card: Filip Hrgovic vs  Zhilei Zhang

Usyk vs Joshua 2: How to watch?

In the USA: Anthony Joshua’s fanbase is spread all throughout the world. In the United States of America, boxing fans can watch the event live on DAZN. The event will go live on air from 12:00 pm EST/9:00 am PST. The bout will be available to the DAZN customers for a fee of $19.99 each month or $149.99 for a full year.

In the UK: The excitement for the rematch is through the roof in Anthony Joshua’s homeland. Fans in the United Kingdom will be able to catch the fight live on Sky Sports Box Office. The PPV will cost the fans £26.95. In the region, the proceedings will start at 5 pm in the evening on August 20th.

In Ukraine: The fans in Oleksandr Usyk’s home country, Ukraine, can watch the fight for free. According to a report from Boxing Social, the Saudi organisers have decided to give the streaming rights for free to the country. Ukraine’s state public TV channel Suspline, Usyk’s YouTube channel and streaming service Megogo will air the event live.

In Australia: The event will start at 2 am Australian standard time on August 21st. Much like the viewers in the USA, Australian fans will also be able to catch the event live on DAZN.

In Russia: DAZN will also stream the fight in Russia. The event will start at 7 pm in Russian standard time on August 20th.