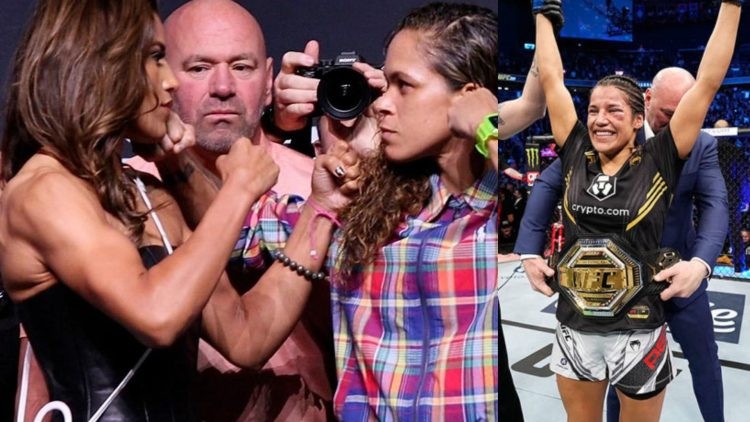 In one of the biggest rematches in UFC history, Julianna Pena will defend her bantamweight title against Amanda Nunes in the main event of UFC 277.

The MMA world is still shocked after the first fight between Nunes and Pena. The GOAT of women’s MMA, Amanda Nunes lost to Julianna Pena in a striking battle first before getting submitted with a rear naked choke.

Now there were many factors leading up to the first fight, which cost Nunes her title. Many fans believe attle with COVID and Distractions in her personal life had a huge impact on Amanda Nunes’ performance.

Even though many fans would still call it a fluke, Julianna Pena is adamant to prove everyone wrong again as she is willing to do whatever it takes to win at UFC 277.

During the press conference for UFC 277, when Julianna Pena was asked about her strategy to beat Nunes again she delivered a fiery speech that got the crowd excited. Pena stated: “I am going to punch, kick, pull her hair, I am going to bite her, I am going to gouge her eyeballs if I have to, I literally gonna do everything in there. Trust me when I say I am ready and willing to die. Whatever it takes I am gonna do whatever it takes.”

Well, the path to victory won’t be easy for Julianna Pena in the rematch. The credit must be given to Pena for beating Nunes at UFC 269. However, it is true that Amanda Nunes did not show up at her best on that night.

And the GOAT is aiming to rectify her mistakes and be more precise in the rematch to avenge her loss.

“Saturday I just have to be precise with my shot. Of course, everybody makes mistakes and I made one. But I adjust everything I get everything tight and sharp. I will show you guys I deserve my title back.”

The UFC 277 press conference was fairly entertaining with Brandon Moreno, Kai Kara France, Derrick Lewis, Sergei Pavlovich, Alexandre Pantoja, and Alex Perez on the stage. The back and forth between Amanda Nunes and Julianna Pena was the highlight of the press conference.

Fans in the arena were excited to see Texas’ own, Derrick Lewis on the stage and they loved it when Lewis played a joke with a Spanish media member.

UFC 277 is shaping up to be a great PPV card and the stakes can not be higher as in the main event the legacy of Amanda Nunes will be on the line.