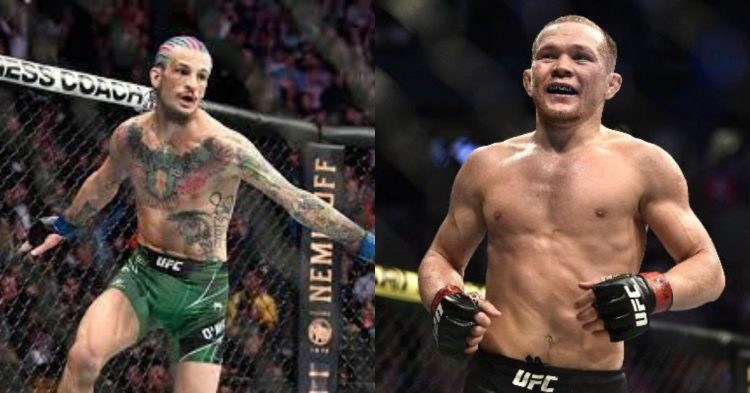 Sugar Sean O’Malley looks prepared to take on the former Bantamweight champion Petr Yan at UFC 280 in Abu Dhabi. Worth mentioning that Petr Yan is the number one Bantamweight contender in the world while O’Malley is not even in the top 10. That itself suggests how big of a step-up in competition it is for O’Malley.

Now, in a recent interview with The Schmo, O’Malley has made some bold predictions. He said “I’d be surprised if I didn’t drop him early. If I I’m being honest I’m gonna connect over and over and over again on his chin and I plan on dropping him early. He’s super tough and durable so I could see it going to decision. I could also see me putting his lights out.” With the level of striking both of these fighters possess, it wouldn’t be surprising to see one of them getting dropped very early in the fight. And if that doesn’t happen a five-round classic is what we are set for.

After losing his interim title to Aljamain Sterling, Petr Yan will be desperate to get a win. This win might not get him back in the title picture anytime soon but beating a Marquee fighter like O’Malley will certainly boost his confidence. O’Malley on the other hand has cashed in on a jackpot, a title shot is almost confirmed for him if he gets past Yan.

Some believe that it’s a massive mismatch for O’Malley and Yan’s level of striking will be too much for him. But anyone who has seen O’Malley’s recent performances knows that he has mastered the art of striking as well. The power and accuracy of his shots is unmatched. The only department O’Malley lacks is Experience. While Yan has beaten experienced and high-level fighters like Jimmy Riviera, Urijah Faber, Jose Aldo and Cory Sandhagen. Sean O’Malley is yet to register a win against a top 10 bantamweight contender.

Even after being a massive 4-1 underdog O’Malley believes he has all the tools to put Petr Yan out. O’Malley is already planning to get the winner of Aljamain Sterling vs TJ Dillashaw but for that to happen, he will have to defeat the no. 1 bantamweight contender in the world. It might seem unlikely but MMA is a crazy sport.