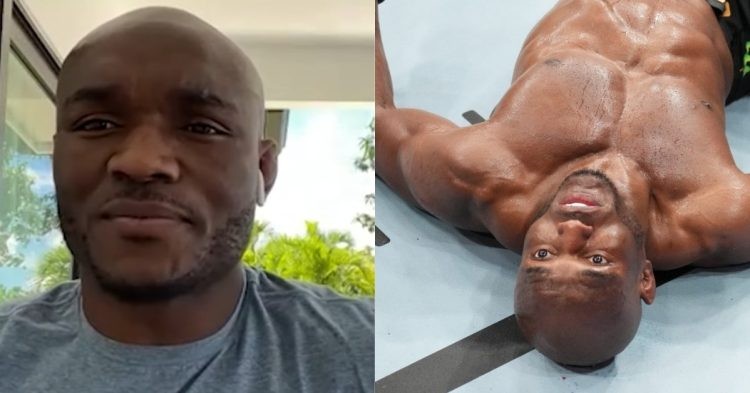 Losing is something that a combat sports athlete never wants to endure. The fighters take a lot of pride in what they do and a loss infront of a sold-out arena takes its toll on them. At UFC 278, Kamaru Usman suffered the first loss of his UFC career in 7 years. Hence, the fans were worried about his mental well-being. But Usman has reassured his fans and stated that he is doing well.

At the recently concluded PPV, held in Salt Lake City, Kamaru faced off against Leon Edwards in the main event. Despite a dodgy first round, Usman showed why he was the no. 1 pound-for-pound fighter in the UFC and dominated the following 3 rounds. He was cruising towards a decision victory with only 50 seconds left on the clock in the 5th round.

But Leon pulled off one of the most unlikely wins as he landed a head kick that flatlined Usman. The reaction from the fellow fighters and fans signified how shocking the win was for Leon. The nature of the knockout was brutal and it made the fans wonder how the loss has affected Usman’s psyche. But, by the sound of it, it seems like The Nigerian Nightmare is not bothered.

“It happened like that’s the beautiful thing about this sport is, that happens and we forget what was actually taking place in that fight. So, I’m not down at all. It’s almost like everyone is more sad about it than I am.” (h/t via TMZ Sports)

As the MMA community is well aware, the fans will not pass the opportunity to turn any opportunity to put out some good memes. Following Conor McGregor‘s KO loss against Dustin Poirier at UFC 257, the fans brutalized him online and turned him into an instant meme. So was the case with Usman’s loss to Leon Edwards.

Kamaru Usman: I will just hold up it’s 1 minute left

Leon Edwards in the fifth round vs Kamaru Usman. #ufc #ufc278 pic.twitter.com/2DPowJeRAb

Has anyone else seen this??? Joe rogan trying to interview kamaru usman in the back after his ko loss… lost respect for joe here pic.twitter.com/eA44vum3YJ

However, Usman has a very refreshing outlook on the situation. Instead of getting angry about it or berating the fans, Kamaru is enjoying the memes. He wants to use the trolling from the fans as fuel to motivate himself to come back stronger and set an example for the fans.

“I got that I was famous before. But f**k, with the meme actions going on, oh I’m famous now. No, but it’s just an added bonus, added hunger to the return. I’m just excited, I’m excited for what’s next. I have a rare opportunity now to just inspire and motivate and show people that you can fall and get back up.”

It looks like Usman will get an immediate rematch and it will take place in Leon’s home country of England. However, there is yet to be an official timeline for when the trilogy fight between them may take place.