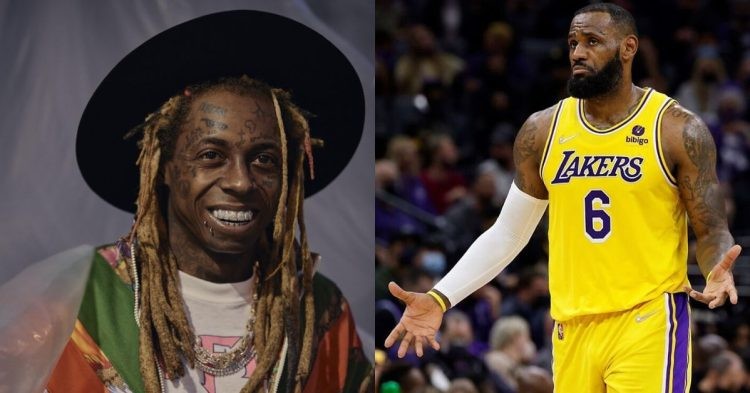 LeBron James is coming off one of the best scoring years in his career with the Los Angeles Lakers. Therefore, the team is still discussed despite their lack of recent success. We all know how LeBron, Anthony Davis, and Russell Westbrook failed to make the playoffs this year. Musician and rapper Lil Wayne discussed why he still doesn’t count the Lakers out.

No matter how you think about it, It is quite unfair to count any team out before the NBA season starts. The Lakers may have disappointed us last year. However, Lil Wayne’s faith in them still remains unshaken and he explained why.

We are all quick to forget that 2 of the 3 stars in Los Angeles missed stretches of the season this year. LeBron is being given a pass for his age and stage of career. While Anthony Davis is criticized for being injury prone and called “soft.”

We expected all the LA stars together this season. But, injuries simply would not allow it. Wayne discussed the importance of their health and why he would still give the Lakers a shot to win it all.

“Beyond being a fan, I believe we can go all the way. Yeah, I believe the Lakers go as far as Bron takes them. And as far as AD, as far as AD health take them. I believe if Bron and AD out there you know what I’m thinking… I don’t think Russ could hurt the… You gotta remember it ain’t like Bron and AD were out there.”

The media might have focused a little too much on Westbrook’s flaws alone. Therefore, Lil Wayne reminded them that it wasn’t like we saw LeBron James and Anthony Davis in full form.

This is quite an interesting opinion and perhaps Wayne has a point. However, based on injury history and behavior pattern, it is quite unlikely that we will get to see Bron and AD dominate consistently.