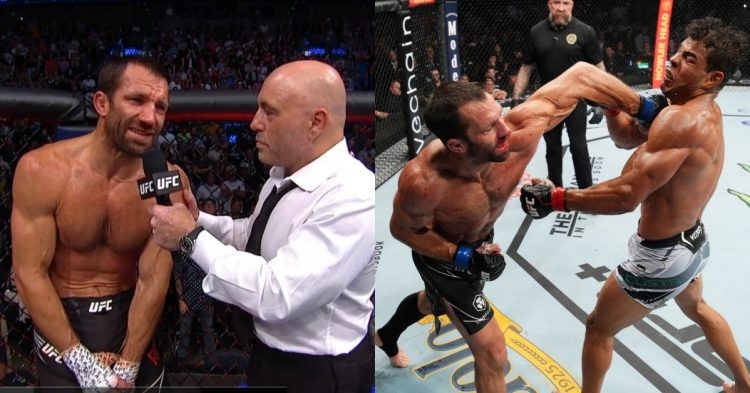 When Paulo Costa vs Luke Rockhold was announced for UFC 278, the fans expected it to be a good scrap. However, nobody could have expected the fight to go the entire 15 minutes. What a display of heart from both men in a bloody affair and it was Paulo Costa who got the win. Following the bout, Luke Rockhold announced that he is done with MMA.

The fans have never seen Luke Rockhold as tired as he was in the fight against Costa. At the end of the first round, Rockhold was visibly exhausted as he had his hands on his knees after the end of each round. However, Rockhold certainly showed an improved chin after a layoff of 3 years. He had 3 losses in his last 4 fights via KO. Although he lost the bout against Paulo, his chin held up.

Paulo Costa also put up a very impressive performance. There were doubts about his cardio heading into the fight. However, Costa seemed the fresher fighter throughout the duration of the contest and he battered Rockhold for the majority of the fight. All 3 judges scored the fight 30-27 for Borrachinha.

Luke Rockhold has been a professional fighter since 2007. He has seen many ups and downs throughout the course of his career. He has held both the Strikeforce and the UFC middleweight belts. So, Luke has accomplished things in the sport that only a handful of fighters dreamt of.

But it was very evident that Luke was not the same fighter anymore. Since his loss to Michael Bisping at UFC 199, Luke has been diminishing gradually and the fight against Costa was the final nail in the coffin for his career. Although he had his moments when he landed some massive shots on Costa, he looked like a shell of his past self.

Luke Rockhold hangs up his gloves after 15 years of fighting inside the cage. He retires with a record of 16-6.