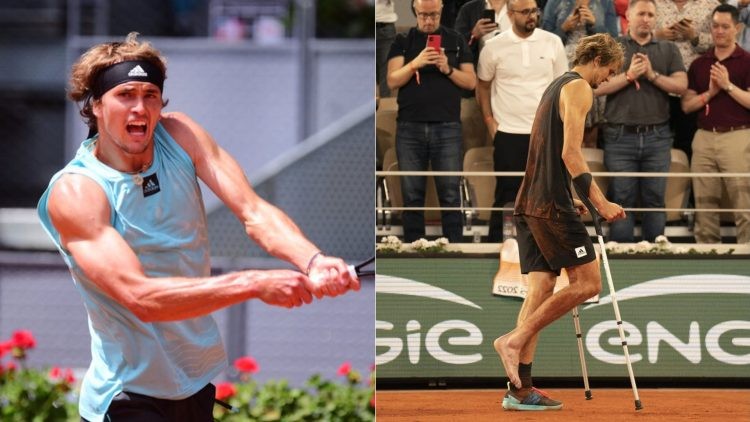 Since then, Zverev has been out of action and did not even participate in Wimbledon which was won by Novak Djokovic.

With the US Open approaching fast, an important decision lies ahead of the current World No 2. Alexander had revealed that he had suffered multiple torn ligaments in his right ankle, however, he still has not been ruled out of the last grand slam event of the year, the US Open.

His spokesperson recently revealed that he might directly be participating in the Davis Cup in case his rehabilitation period gets extended. The spokesperson in an email to Reuters further stated,

“Sascha is recovering well and is still hoping that he can be ready for the U.S. Open,”

“However, it is still too early to tell if he will be able to compete there or not.”

“Davis Cup in Hamburg in September seems more realistic but we keep our fingers crossed that he will be ready earlier,”

“Therefore, he should be able to play a few events before Tokyo.”

Alexander is strong at the US Open and he was even the runner up at the 2020 US Open.

Will Alexander Zverev play in the US Open?

There has been no official confirmation pertaining to his participation in the upcoming US Open, however, he has laid down certain conditions for himself in order to make a return back on the tennis court.

He has specifically insisted that he would be returning back on the courts only after he feels ready to go and win a tournament. He stated that he does not have a fixed date for his return and he wants to win every tournament he participates in the future.

Keep up the good work @AlexZverev 💪

Zverev surely would be looking forward to getting his strength back and also becoming match fit for US Open and any match he plays in the future. In case he fails to recover from his injury, he would be directly participating in the Davis Cup.