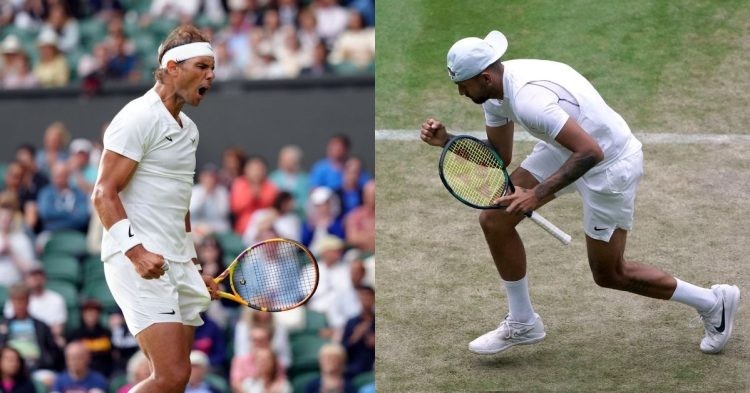 Rafael Nadal struggled against Taylor Fritz in the quarterfinal due to his abdominal injury. However, he kept himself going and won the match to set up an exciting semifinal clash with Nick Kyrgios. A day before the match, Nadal revealed that his injury had become worse after the match forcing him to withdraw from the semifinal.

It looked like the Spaniard was not confident to compete against Kyrgios with such an injury. While he managed to beat Fritz, it would have been much more difficult to go past Kyrgios. The Aussie has been playing well at the tournament, winning his quarterfinal match in straight sets.

According to Scroll, the 20-time grand slam winner also said, “I don’t want to go out there, not be competitive enough to play at the level that I need to play to achieve my goal, and with a big chance to make the things much worse.”

Fans were getting excited for a Nadal-Djokovic final at Wimbledon this year. With both the legends making it to the semifinal, the ultimate Wimbledon final looked inevitable. However, Nadal’s injury crushed the hopes of tennis fans for a dream final. Many fans expressed their disappointment on Twitter and other social media platforms.

I’d love Nadal and Djokovic in the final, Nadal would have been King of 2022 #Wimbledon2022

Nadal and Djokovic share one of the biggest rivalries in the history of tennis. Moreover, Djokovic was the top seed in the tournament followed by Nadal. It had been a long time since a final that exclusively had players from the Big Three. With Federer not playing this year, fans were clinging on to this potential final.

With Nadal out of the tournament, Djokovic’s chances of winning the Wimbledon trophy have gone up. If he wins the title, it will be his 21st grand slam and he will go ahead of Federer in the race of grand slam titles. However, it is too early to say anything as he has two matches to win before lifting the trophy.