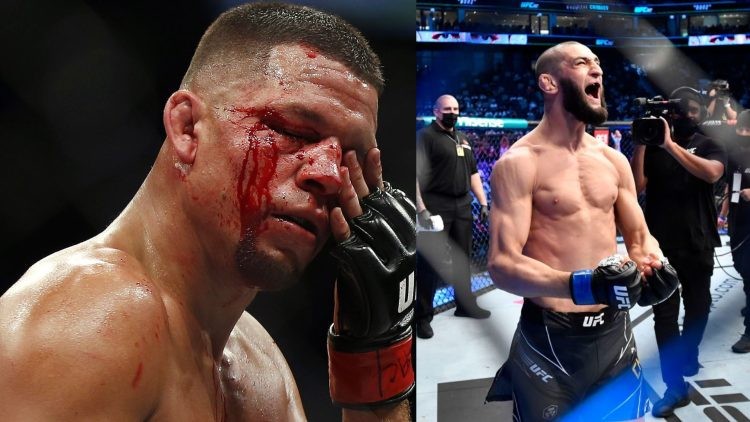 Khamzat Chimaev will return to the Octagon to take on veteran Nate Diaz in a five-round fight inside T-Mobile Arena in Las Vegas at UFC 279. After months of social media call-outs from Nate Diaz, the Stockton Slugger finally has a fight. However, fans aren’t really liking the idea of “feeding” Diaz to the Borz Khamzat Chimaev

Speaking to the media, UFC President Dana White shares why that is not the case, and it is Diaz who actually wanted to take on Khamzat Chimaev.

“I care about Nate a lot. I like Nate and Nate came in here long before that fight was ever made. We were talking about it being his last fight.” White said.

UFC has been criticized by the fans for booking Khamzat Chimaev vs Nate Diaz and many believe that the company is trying to bury Diaz’s name by matching him up with someone like Chimaev.

There’s no denying that Chimaev is a nightmare match-up for Diaz, who has struggled against grapplers in the past. Taking on someone like Chimaev is definitely asking for trouble, however, White has clarified Diaz wanted to fight Francis Ngannou, hinting that a fight then with Chimaev isn’t necessarily feeding him to a dangerous fighter when compared.

“Getting a fight done with him isn’t as easy as it seems. He’s like, ‘why don’t you make a fight.’ He asked for Francis Ngannou, you know. I could go on forever but I won’t. We got it done, that’s the fight he wanted, we made it, and here we are. And it’s a good fight. It’s the fight that people wanna see. It’s a fight that people would be interested in, so we are gonna do it.” Dana White said.

Even Diaz’s representative has made a statement stating that the Khamzat Chimaev fight is the one they asked for and not the one they were offered. Whatever may be the case, one thing is for sure; Nate Diaz comes to fight and he will fight absolutely anyone put against him inside the Octagon.