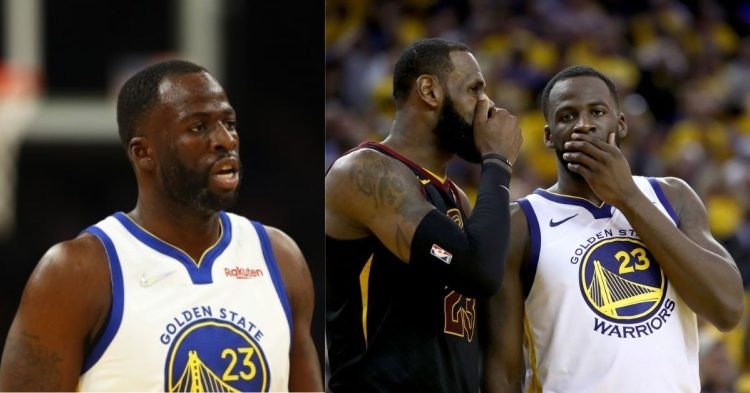 We all know how dominant GSW was in the last decade. They first made the NBA Finals and managed to defeat LeBron James in 6 games. However, the following year they lost to the King despite having a 3-1 lead in the series.

There were several reasons the Warriors blew this lead to the Cleveland Cavaliers. Draymond recently spoke about his role in the 2016 NBA Finals.

One of the many reasons the Cavs were able to win this series was the suspension of Draymond Green for an incident during Game 4. The Warriors had a 2-1 lead on the series and were already poised to win this pivotal Game 4.

There were less than 3 minutes left in the game and the Warriors led by double digits. Draymond set a screen on LeBron to help his teammate Curry create some space. Both of them got entangled and Green ended up on the floor. King James, eager to get back into play decided to step over Draymond.

One of the unspoken rules in the NBA was broken and this intensified the scuffle between the two players. During the interaction, Draymond called LeBron “a bi*ch“. This was simply unacceptable to the referees and they instantly ejected him from the game. Nonetheless, the Warriors ended up winning and took a commanding 3-1 lead.

This should have been the end of it. However, Green was suspended from game 5 and was not allowed to play. Therefore, he let LeBron steal a game on the road. Moreover, James went on to win Game 6 back in Clevland and eventually win Game 7.

Draymond Green is partially responsible for these events. However, he revealed that they do not really affect him, “I cost us a championship. I’m fine with that, I can take that on the chin, no problem, I own up to my mistakes. Would I do it again? One thousand percent.”

Draymond on his Game 5 suspension in 2016 NBA Finals:

“I cost us a championship. I’m fine with that. I can take that on the chin, no problem. I own up to my mistakes. ‘Would I do it again? One thousand percent’.”

It is unfair to assume LeBron would have lost simply because Draymond was present. Regardless, we know Draymond has 4 rings to his name and is quite satisfied.