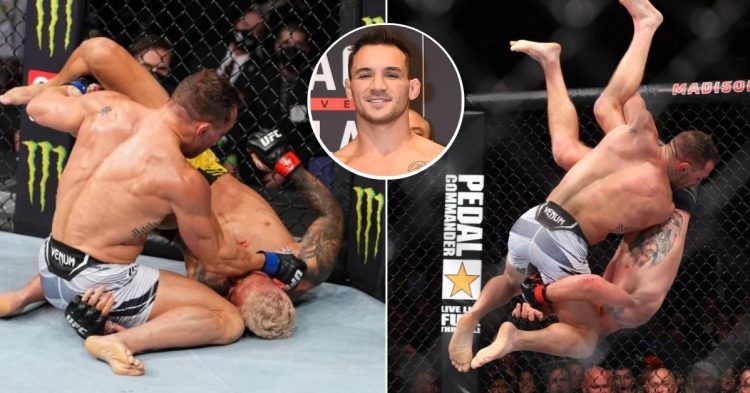 Michael Chandler did not mince his words as he revealed exactly how he thinks he will beat Dustin Poirier come UFC 281. The duo will share the UFC Octagon on November 12 inside MSG at UFC 281. Ahead of what many are calling the “fan’s main event” at UFC 281, Chandler shared his thoughts on his game plan to emerge victorious on November 12.

“I defeat Poirier by going out there and keeping my foot on the gas. Never really let him get really started, put him down and finish him.” Chandler said in the UFC 281 Countdown video.

If there’s one thing that we have learned about Michael Chandler in the four fights he has competed inside the Octagon, it is that Chandler always comes guns blazing at his opponents. Be it his first-round win over Dan Hooker, or back to back losses against Oliveira and Gaethje, or the vicious KO win over Tony Ferguson; Michael Chandler never fails to entertain!

Ahead of UFC 281 fight against Dustin Poirier, things appear to be a little different. While many expect Chandler to be as reckless as he has been in his previous UFC fights, many are expecting him to show his grappling prowess inside the cage this time around.

Will Michael Chandler use his wrestling against Dustin Poirier?

Going against a seasoned striker in the form of Dustin Poirier, it’s safe to say Chandler will have his hands full. Moreover, with a granite chin like Poirier and a tenacity like no other, Poirier will be the toughest task of Chandler’s MMA career.

Going against someone like that, it won’t be wrong to say that Chandler might look to use his wrestling pedigree to gain an advantage. Dustin Poirier has had a bit of a rough patch against grapplers. Chandler will make sure to put that into his game plan.

Chandler has admitted Poirier is a better striker than him. Moreover, he also has knockout power in his hands, so if the striking cancels out at UFC 281, it will boil down to who gets the edge in grappling. In that department, one wonders how much damage can Chandler force on Poirier and if he can use it to get his hands raised at UFC 281.