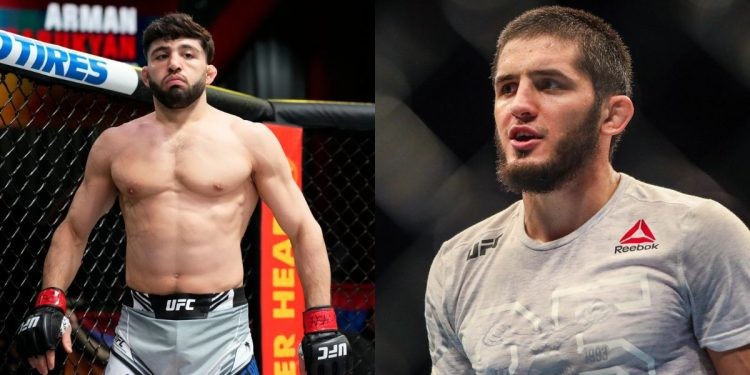 Arman Tsarukyan is set to headline his first UFC event when he takes on Mateusz Gamrot on June 25th. He is undefeated in his previous five outings inside the octagon and is looking to extend his winning streak. Interestingly, his last defeat came at the hands of the #4 ranked UFC lightweight, Islam Makhachev.

Arman Tsarukyan took on Islam Makhachev back in 2019 in a three-round fight. After fighting hard for 15 minutes, Tsarukyan was handed his second-ever MMA defeat. Speaking about his loss to the UFC lightweight championship contender, Tsarukyan suggested that he hadn’t trained enough for the fight.

Arman Tsarukyan recently sat down for an interview with ESPN MMA ahead of his first UFC headliner and suggested that he had his wedding just two weeks prior to his fight against Islam Makhachev. He also mentioned how this made it harder for him to cut weight. However, he also acknowledged the fact that he should’ve stayed focused regardless, he said:

“First of all my weight was like, 87 kilos, 86 kilos, because I got married at that moment, I didn’t train enough. But it’s not, you know, it doesn’t matter, I trained or not, I signed that fight you know? I gotta be like prepared for that day you know?

The future is 𝐍𝐎𝐖!@ArmanUFC & @Gamer_MMA are ready to step into this weekend’s main event spotlight 💡

Mateusz Gamrot has only one loss on his MMA record and certainly possesses the ability to get the better of Arman Tsarukyan on his day. On the flipside, Tsarukyan will look to capitalize on his wrestling acumen in an attempt to nullify his opponent’s striking abilities. Regardless of the outcome, it is safe to say that the matchup will be the one to look out for.