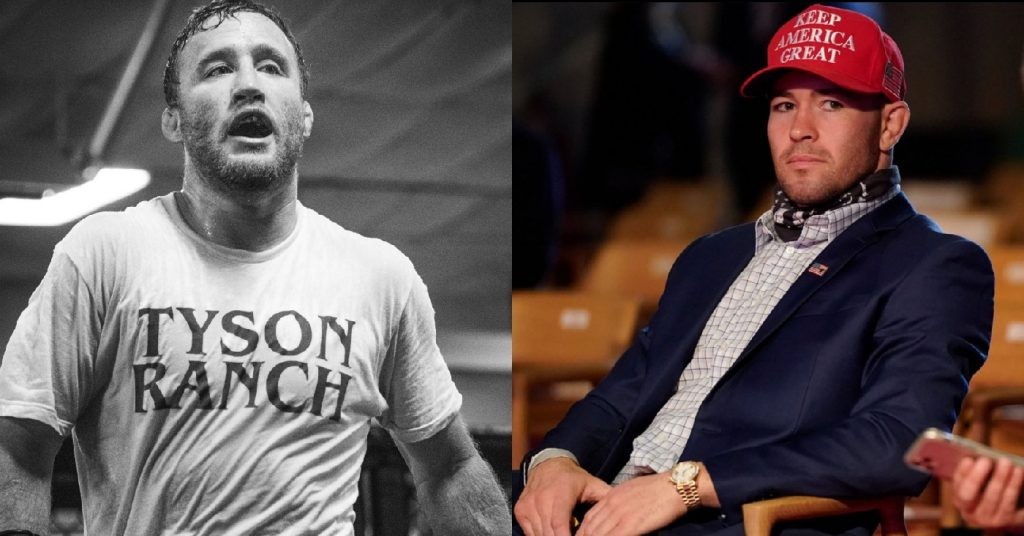 Justin Gaethje expressed his views on the Welterweight title fight between Kumaru Usman and Colby Covington. The fight will go down at UFC 268: Usman vs Covington 2 on November 6 inside Madison square garden. Justin Gaethje will be facing Michael Chandler in the same event.

In an interview with ESPN MMA, Gaethje was asked to choose the winner of the main event. Gaethje was very clear as he chose Usman as the winner. Gaethje revealed that he personally doesn’t like Covington and wishes Usman to defeat him in dominating fashion. ” I dislike Colby so much, so I wanna see(Usman) really put it on him “, Gaethje expressed.

Despite his annoyance towards Covington, Gaethje gave him credit for his fighting abilities. ” a damn good fighter that little f***. Piece of s*** person, but he’s a good fighter and wrestler” said Justin. Gaethje went on to explain the similarities between him and Covington for which you can’t help but to give credit to Covington. “ Hungry, you know stupidly crazy like we all are so yeah, it’s gonna be a great fight,” Gaethje said.

Will Colby Covington be able to get his hands on the belt this time?

This isn’t the first time Covington will take on Usman. The bad blood between the two fighters goes back to 2019 at UFC 245. In that fight, both the fighters went on a war against each other showcasing impeccable fighting abilities. After five gruesome rounds, ‘The Nigerian Nightmare‘ shut down Covington by breaking his jaw and winning the bout by TKO. But little did we know that it was only the beginning of one of the biggest rivalries inside the UFC currently. After the fight, the champion went on to defend his title three times. Usman managed to beat down Gilbert Burns and also defeated Jorge Masvidal twice. Usman ran through the whole Welterweight division like a king dominating anyone who came in his way. On the other hand, Covington wasn’t as active as Usman. His only fight in two years was against Tyron Woodley which he won by TKO.

Covington is finally getting the chance for his ultimate redemption against Usman. The heated conversation between them prior to the fight is a great proof of what both these fighters are going to do to each other inside that octagon. While the stage is set, let’s hope to see a fighting spectacle.