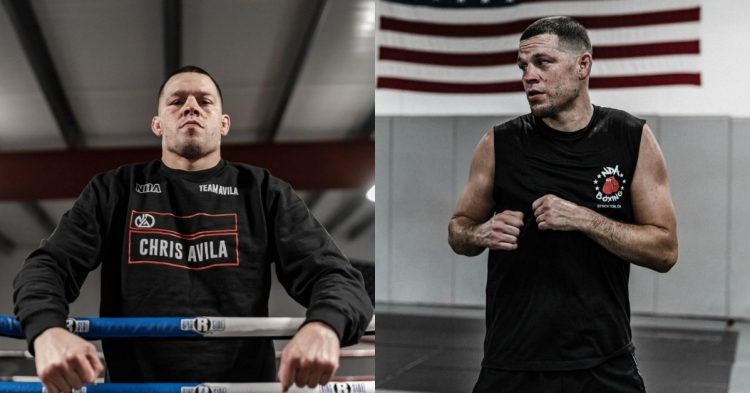 Nate Diaz is in shape ahead of UFC 279. (Images via Nate Diaz's Instagram)

It seems like the love-hate relationship between Nate Diaz and the UFC continues. Diaz, who is set to face Khamzat Chimaev at UFC 279, expressed his displeasure with the way UFC handled his situation.

After months and months of speculation about Nate’s future, UFC finally booked him to fight Khamzat Chimaev on September 10th. As per rumours, this particular fight will be the last fight of his existing UFC contract. Although there were brief talks of Nate re-signing with the company, it now seems like Nate has no interest in continuing his partnership with the company.

There have been rumours of Nate possibly fighting Jake Paul in a boxing bout. So it remains to be seen what his next move is.

Ufc release now please or give me fight with anyone in July or august
I have bigger shit to do pic.twitter.com/xyYSCBysLs

Nate is currently on a 2-fight losing streak and has lost 3 out of his last 4 fights. He has suffered a lot of damage in those 3 bouts against Leon Edwards, Jorge Masvidal and Conor McGregor.

But according to the man himself, he’s better than ever! Diaz was recently quoted saying that just wants to put the Chimaev fight in the rearview mirror. Although Nate has been fighting for almost 18 years now, Nate feels as if he is at his best at the age of 37.

“They finally offered me Khamzat and I said, ‘Why not let’s just get it done?’ Getting over with. I have been in the UFC the longest and as it goes, as times go by people come in and they come out. They’re waiting in and out. Against all odds, you know everybody. I have been devalued the whole time, people have been built off me left and right.”

Khamzat Chimaev has opened as a massive favourite over Nate Diaz. From the odds, it seems like a huge mismatch on paper. To some extent, it really is. Nate is massively undersized and on the last legs of his career. Khamzat, on the other hand, is on the rise and is gunning for Kamaru Usman next.

So the expectation is that Nate Diaz will get demolished by the hands of The Borz. But, as the fight fans know, counting out a fighter even before the bout starts, is a bad move. For example, Julianna Pena caused tremors across the MMA world by beating Amanda Nunes at UFC 269. Hence, there is a chance that Nate beats Chimaev at UFC 279.

Nate was getting dominated by Leon during their bout at UFC 263, but he almost won in the closing seconds after catching Edwards off guard. So there is a chance of something like that happening. The younger Diaz also has great BJJ (Brazilian Jiu-Jitsu) skills. Hence, he may also catch Chimaev in a surprise submission on the ground.

Do you think Nate Diaz is capable of causing an upset at UFC 279? Or Khamzat Chimaev is unstoppable at the moment? Let us know in the comments down below.