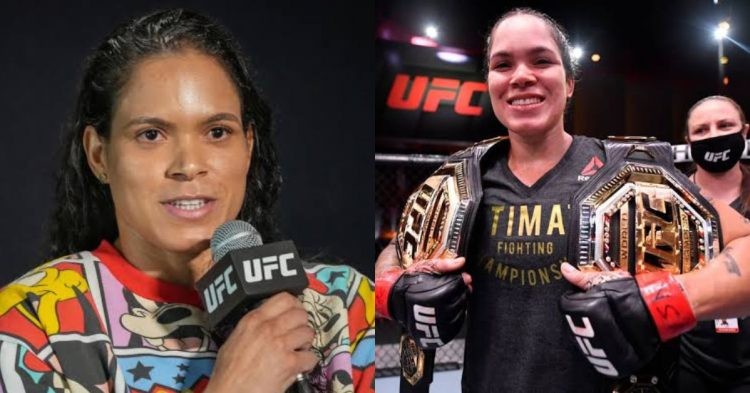 Amanda Nunes will be back in action this weekend to take on Julianna Pena in a highly anticipated rematch that will take place in the main event of UFC 277. This women’s bantamweight title fight will go down on July 31st at the American Airline centre in Dallas, United States of America.

The Lioness will look to avenge her UFC 269 loss in this rematch against Julianna Pena as the Venezuelan Vixen dethroned her crown as the bantamweight queen by submitting her in the second round of their first fight. Consequently, ahead of this big rematch, Amanda Nunes sat down with Espn’s Marc Raimondi for an interview and answered several questions.

During this conversation, Marc Raimondi asked Julianna about her thoughts after the UFC President commented in one of the interviews that Nunes lost to Pena because of her lack of hunger. Interestingly, Amanda agreed with Dana White’s comments and confessed that she lost motivation ahead of her UFC 269 loss.

“I feel like what he’s saying sometimes it’s like if you’re looking that way yeah I got very comfortable you know, and you want to enjoy like when you do all these things that I did. I want to travel, I want to go see my family, I want to rest a little bit and the tendency is like you’ll slow down a little bit you know what I mean.”

Amanda Nunes had dominated the bantamweight division for a long time until she fought against Julianna Pena and suffered a brutal loss. While speaking to ESPN MMA journalist Marc Raimondi, The Brazilian bantamweight revealed that cleaning out the division made her complacent while preparing for the Pena fight.

“One day you kind of like I’m gonna relax a little bit you know what I mean I’ve been doing I did so much now like I can kind of rest a little bit and I always dominate you know become a double champion and I always like do all those things like kill all those girls in front of me, clean the division so I kind of slowed down too.”

However, Nunes reckons that her recent loss to Pena has reignited the fire within herself and is highly eager to take revenge when they square off inside the UFC octagon this weekend at UFC 277. Amanda has made some big changes for this rematch as she switched from her old team ATT and is currently training at her own gym.

Do let us know in the comments section who you think will emerge victorious in this bantamweight title fight between Julianna Pena and Amanda Nunes.