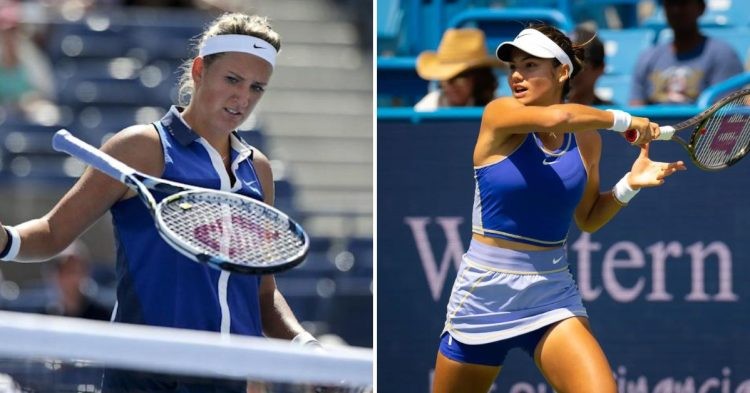 Emma Raducanu had been struggling to win matches ever since her US Open triumph last year. However, it looks like she is finally getting back in form right before the next US Open. She played Serena Williams in the first round of the Cincinnati Masters and won the match comfortably.

In the second round, Raducanu faced another veteran Victoria Azarenka and destroyed her in straight sets to win the match 6-0, 6-2. The defending US Open winner did not shy away from giving credit to herself for playing a near-perfect match.

As per Sky Sports, she said, “I was playing a great match for sure. I had to stay really focused throughout and in the second set I could feel the important moments. There were a couple of turning points that could have made the second set really, really difficult… more than it already was.”

Raducanu has been a fan of Serena and Azarenka and showered praise on her Belarusian opponent after winning the match. She said, “It was another great honour to play Vika, she’s won so many Championships and Slams. It’s just a great opportunity for me to be out here.”

Emma Raducanu has zoned out critics who constantly criticize her

Raducanu won the US Open when she was only 18 years old. However, she struggled to win matches and tournaments after that. This led to critics constantly criticizing her and striking her off as a one-time wonder. However, Raducanu has constantly backed herself and her recent performances have silenced those critics.

Too hot to handle 🔥

🇬🇧 @EmmaRaducanu sets up a meeting with Pegula after a thrilling victory over Azarenka!#CincyTennis pic.twitter.com/vYrbr7AAP0

Talking about the critics, Raducanu said, “I think I’ve realized in the last year that people are going to talk, regardless of what you do. The things that I do are maybe more amplified because of my situation. I’ve just learned to really zone in internally.”

Raducanu needed such dominating wins against big players like Serena and Azarenka to boost her confidence ahead of the US Open. She will try to carry this momentum walking into the US Open where she will defend her title.