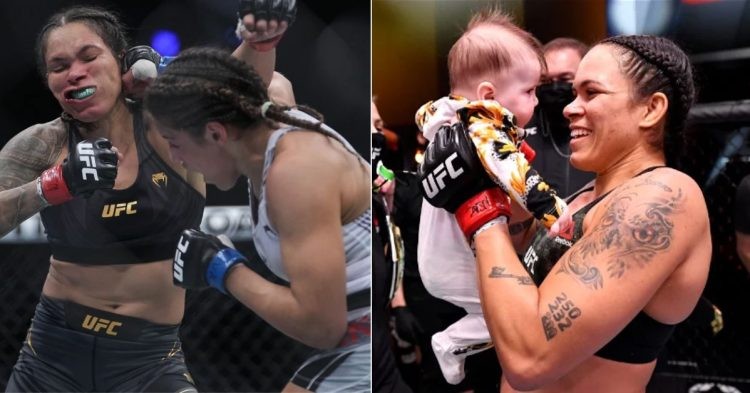 Amanda Nunes has established herself as one of the greatest mixed martial artists in the history of UFC. With wins over the likes of Cris Cyborg, Valentina Shevchenko, Ronda Rousey, and Germaine de Randamie, there’s no denying the legacy of Nunes.

However, as unpredictable as the sport of mixed martial arts is, Nunes faces a tough challenge in front of her heading into UFC 277; one that could potentially tarnish her legacy as the GOAT of women’s MMA.

After the shocking loss to Julianna Pena back at UFC 269 via submission in the second round, Nunes is heading into UFC 279 with a chip on her shoulders. Ahead of the bantamweight title fight, Nunes sat down with Kevin Iole of Yahoo Sports and shared her thoughts on the UFC 277 headliner.

Amanda Nunes was a  two-division champion, having defended her belt against some of the greatest mixed martial artists to ever step foot inside the Octagon. She was the clear favorite heading into UFC 269, with many fans not even giving Pena a chance to triumph over the Lioness.

It’s hard to imagine the emotions running in the Nunes’ family and camp following the shocking loss. Amanda recalls she did not even have time to be sad. With her daughter in her arms, Nunes had to look past the title loss and put on a smile for Raegan Ann Nunes.

“I saw Raegan right after, you know she kinda like, she want to play with me. I said like, ‘okay, I just lost my belt but I have to be happy for my daughter.’ You know, life goes on.” Nunes said. “Every time that I lost it, and then I make adjustments in my life, adjustments in my training. And if I have to make some changes, I have to do.” She further added.

Ahead of the rematch, Nunes looks completely confident, having gone through a full fight camp. She has also recovered completely from the multiple injuries she was facing at the time, and can’t wait to show the world her dominance in the sport of women’s mixed martial arts once again.