Israel Adesanya has always maintained that Jared Cannonier is one of the most devastating strikers in the UFC Middleweight division. He made his intention clear after he showed support to Jared Cannonier ahead of his match-up against Robert Whittaker this October at UFC 254. Robert Whittaker will make a quick turnaround against Rober Whittaker in the co-main event of UFC 254 this October. The card will headline Khabib Nurmagomedov vs Justin Gaethje in a title unification bout for the UFC Lightweight Championship.

Robert Whittaker put up an incredible performance against Darren Till at UFC Fight Night and picked up an impressive unanimous decision win over the former Welterweight title contender. Whittaker is scheduled to take on #3 ranked Middleweight contender Jared Cannonier, in what is being looked at as the #1 contender’s match for the UFC Middleweight Championship. 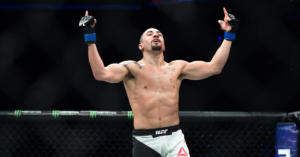 In a recent interaction ahead of his much-anticipated showdown against Paulo Costa for the UFC Middleweight Championship, Adesanya revealed who he wants to face next after Costa.

“I hope Cannonier beats Robert, cause I want a new body,” Adesanya continued. “Jack Hermansson, I don’t really mind too much. But I’d like Darren to get that one done, but he didn’t really get it done 9in his last fight) against Robert. It was a good fight, close fight, but I think maybe the takedowns gave it to Robert. Who knows. But yeah, the Jack Hermansson and Darren Till fight, I don’t really mind. But Cannonier, I hope Cannonier whoops his ass. I want to fight that guy, I like him.”

Jack Hermansson is scheduled to take on Darren Till in December. Hermansson is coming off an incredible submission win over Kelvin Gastelum. He has won four of his last five fights, with the sole loss coming against Jared Cannonier. It will be a tough fight for Darren Till who has earned the respect and attention of many fight fans in the world. Adesanya shared moments after Till’s loss against Whittaker, that he likes his striking and would like to face him someday. Both Israel Adesanya vs Darren Till and Jared Cannonier are interesting match-ups, however, with the way Rober Whittaker has been looking, a rematch could be a very likely possibility.