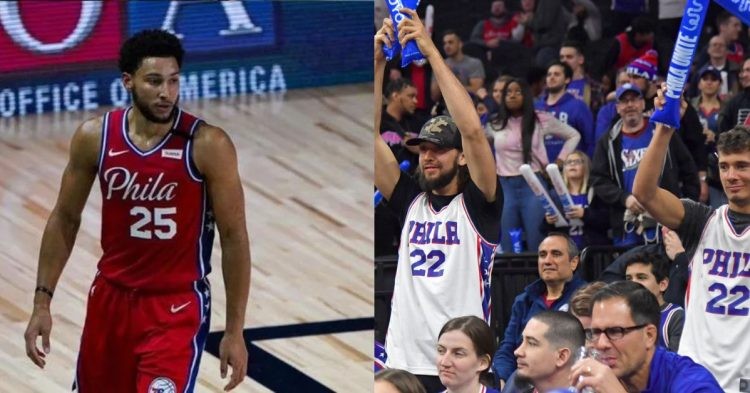 One could argue that Ben Simmons is the most scrutinized athlete in the NBA. This is because he seems to have become a shell of himself over the years. Moreover, he is only 26 years old and yet to hit his prime. However, he seems to have developed a barrier or a mental block when it comes to shooting the basketball. Simply put, he seems to have grown timider towards shooting and more inclined towards passing.

We can’t really pinpoint how this problem originated. Simmons was actually quite a good shooter when entering the NBA. However, the Philadelphia 76ers fans seem to have been a reason for his shooting struggles. It is safe to say they harrassed him on social media and through other forms during the season he spent not playing for the 76ers.

Simmons recently spoke out on how he was treated during this time and how it felt. It is important to understand what he is trying to say and deduce if there is much truth to it.

We should remember that we live in a generation of the internet and social media. Thus, many players have a huge fan following and network on social media such as Instagram. It would interest NBA fans to know that Ben Simmons has 6.5 million followers on Instagram.

As a result, any photo or post that he shared at the time was flooded with “haters” and people looking to simply mock him. One can only imagine how much of this Ben went through and what that would feel like. Therefore, it was no real surprise when he temporarily decided to go off social media. However, he did return to it later.

Simmons revealed what he thought was wrong with the people in Philadelphia, “People in Philly just wanna have something to say about fu*king, anything man. Literally everything. I post a picture of a f**king car or dog. I got reporters saying he should be in the f**king gym.”

Ben Simmons on him not shooting becoming exaggerated:

“People in Philly just wanna have something to say about f**king anything man. Literally everything. I post a picture of a f**king car or dog, I got reporters saying ‘He should be in the f**king gym.’”

It is quite unfair to blame just the people of Philadelphia because Simmons was flooded by haters on social media. However, he claims that even reporters engaged in this form of behavior. We should hope that this is not true and that this issue is soon resolved.