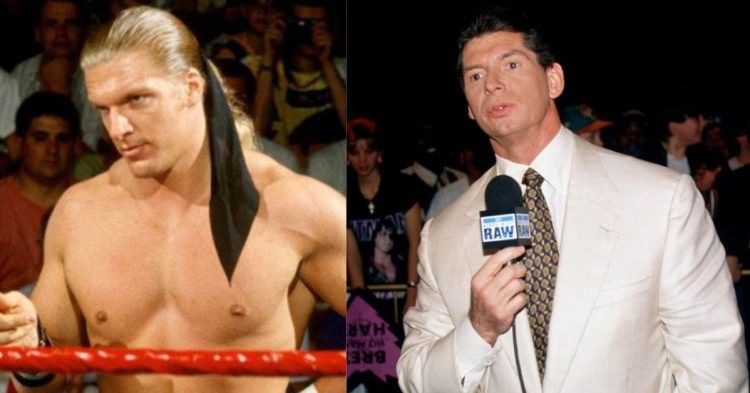 Triple H has won 14 world championships since making his WWE for Vince McMahon debut on April 30, 1995. He currently serves as the executive vice president of global talent strategy and development. He is recognized as one of the best wrestlers in the history of the WWE and would be a great contender to succeed McMahon when he ultimately steps down.

During an interview with WWE’s The Bump, Triple H remembered how Vince McMahon made the decision to sign him after seeing him compete with Alex Wright at WCW’s Starrcade pay-per-view in 1994. “Well, it’s funny for me,” he began. “The very first time I met Vince was when I was still at WCW. My contract was coming to an end. I was trying to gauge interest, I guess you could say. So, they took me to a meeting.” Triple H added.

“JJ Dillon at the time was running talent relations and was in charge of that. I spoke to JJ, he brought me into a meeting with Vince. “I remember coming in and meeting Vince and thinking well for one, it’s Vince McMahon, he has a larger-than-life presence. And, of course, it was the ultimate meeting you could take in the business, especially at that time – maybe even more so today, I guess.”

Triple H continued by saying that he spoke to McMahon on a pay phone in Chicago and was given the opportunity to work for him, “It was after I had performed at Starrcade against Alex Wright at the very end of my contract. “He called me right after that to say if I was still interested in going here, ‘I saw what you did at Starrcade and I’d like for you to come here. “When Vince called me, I was still on the road for WCW and I got to Chicago and when I walked into the hotel I saw one of the agents that were there and he said, ‘the office called and your mum has been trying to call you all day.”

Happy birthday to my son-in-law @TripleH, a Cerebral Assassin in any arena. pic.twitter.com/iOXSGu4CPo

Clearly, Vince McMahon and Triple H grew closer over time. They have grown pretty close over time. Nothing was originally promised to Triple H. He had no money that was assured to him. He just got one opportunity, and he did a tremendous job with WWE of maximizing it.

One of the greatest wrestlers in the history of professional wrestling arrived on April 26, 1995. Hunter Hearst Helmsley made his professional wrestling debut in the WWE, launching a future hall-of-fame career. Paul Levesque established the foundation for a fantastic character that’d make him among the most despised heels in history the instant he strolled from the curtain on WWE’s Wrestling Challenge.

Triple H said in an interview, “In one of our first meetings after I officially signed on with the World Wrestling Federation, Vince McMahon told me that he liked the character I was doing in WCW and wanted me to bring a lot of its elements with me up north. The biggest change we were going to make was that I was no longer going to be a Frenchman. Vince was concerned that if they ever wanted to turn my babyface, which meant turn me into a “good guy,” it would be immeasurably more difficult to do if I was this over-the-top European guy.”

He may be the water-shooting guy that many of us have grown to admire, but this persona left its impact because he was difficult to ignore and enraged almost everyone just by approaching the ring.