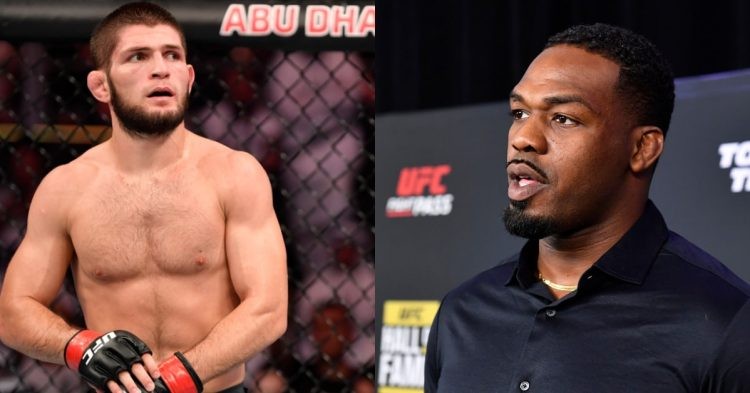 The GOAT debate in Mixed Martial Arts (MMA) is never-ending. While some consider Anderson Sliva to be the best, others think Georges St-Pierre should be on the spot. However, two names that often top the conversation are Jon Jones and Khabib Nurmagomedov.

But the former light heavyweight champion Jon Jones hates the idea of being compared with Khabib. Jones is very protective of his status as the greatest MMA fighter of all time. Whenever fans challenge that notion, Jones provides evidence of why he is the undisputed GOAT.

Recently, Jones took to Instagram to put an end to the debate once and for all. He put out an image which showed Khabib only had a total of 13 fights in the UFC, whereas Jon had 14 championship fights in the promotion alone. He used that as a piece of evidence to show why Khabib does not belong in the same league as him.

He wrote, “Pretty sure I shouldn’t entertain these arguments anymore.”

Not salty at all, I really do respect Khabib, I honor the type of man he is. But being the best is earned not given. Unfortunately four title fights aint it, no matter how much we all like em https://t.co/eDr454nsTa

Following The Eagles’ last fight against Justin Gaethje, he climbed to the top of the P4P rankings for a brief period of time. Jones even protested that.

Jon Jones wants to dominate on his UFC heavyweight debut

Jon Jones’ last fight was in February of 2020 when he defeated Dominick Reyes in the closest fight of his life. But he wanted to relinquish his 205lbs belt in order to pursue the heavyweight belt. But it has been over two years now and the time has not been kind to him. He was arrested during that period on two occasions.

However, he is ready put all the negativity behind him and come back stronger than ever. There were whispers of him taking on either Francis Ngannou or Stipe Miocic on his heavyweight debut. But reports came out recently that UFC is leaning more towards booking Jon against Ngannou for the belt.

Taking to Twitter, he recently expressed the desire to show the same dominance in the heavyweight title fight that he showed against Shogun Rua for his first ever light heavyweight title bout. He also confirmed that he is ready to come back to the promotion at UFC 282.

If he does get a hold of the heavyweight belt, it will be hard to deny Jones the spot as the GOAT in MMA. Khabib Nurmagmodov has only had 4 championship fights and 3 title defences. He also did not fight in any other division to try to grab a second UFC title. So a heavyweight title win at UFC 282 takes Jones miles ahead of Khabib in the GOAT debate.