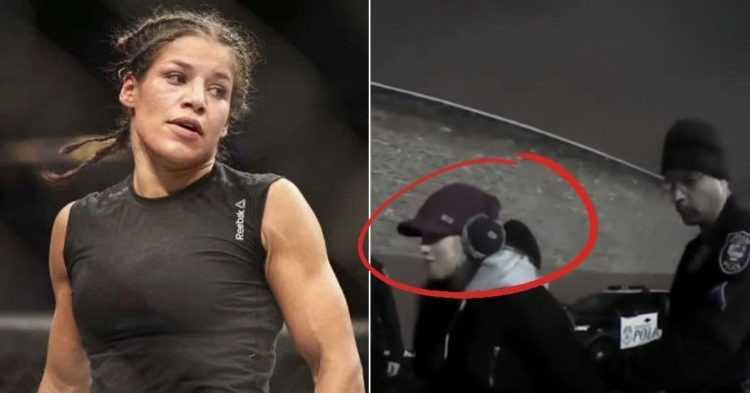 Julianna Pena is an exciting figure in the world of mixed martial arts.  She can be quite intimidating inside the Octagon with her incredible toughness and her impressive submission skills. She can overwhelm her opponent with her forward pressure, and can also land those big strikes. However, she is not just dangerous inside the Octagon, but equally gruesome outside of it.

Back in December of 2015, a month after her unanimous decision victory over Jessica Eye back at UFC 192, Pena found herself in legal trouble that saw her getting arrested for all the wrong reasons.

Julianna Pena has revealed that she got into an ugly altercation with “20 drunk guys” outside of a bar in Spokane, Washington. However, that’s not where Pena found herself in trouble.

Why was Julianna Pena arrested?

Julianna Pena, who was with her training partner Joshua Gow at the time fought off the 20-drunk guys, getting battered up in the process and finally making a run to a bar Julianna Pena identified. It wasn’t their brawl in that bar, but an altercation at this bar that got them in trouble.

Pena alleges she knew the bar owner, and the bartender allowed her to use the bathroom in order to clean up Joshua Gow’s face, who had suffered facial injuries because of the assault earlier. However, moments later, the bouncer at the bar asked Pena to leave, and that’s where things went south.

“Now I’m throwing a fit and drunk and panicking and screaming, like, ‘Why won’t you help this guy? This is his human right to use the bathroom,'” Pena says. “He says, ‘You both can get out.’ So we’re fighting with the bouncer, and all of a sudden the bouncer picks me up and throws me off of a ledge. I end up falling on my ass and dropping every content that was in my purse. … I got up off the ground, and I teep-kicked him basically to say, ‘Get your hands off me. Don’t f—ing touch me.;” Pena recalls.

As soon as Julianna Pena and Joshua Gow made their way out of the bar, the police were already on their way. Julianna Pena was charged with two counts of assault for kicking the bouncer and the bar owner in the crotch. The body-cam footage shows Pena visibly distressed and arguing with the police officers.

It’s funny how Julianna Pena and her friend did not find themselves in trouble when they got into an altercation with “20-drunk guys” but ended up in handcuffs at a place they ran to seek shelter.