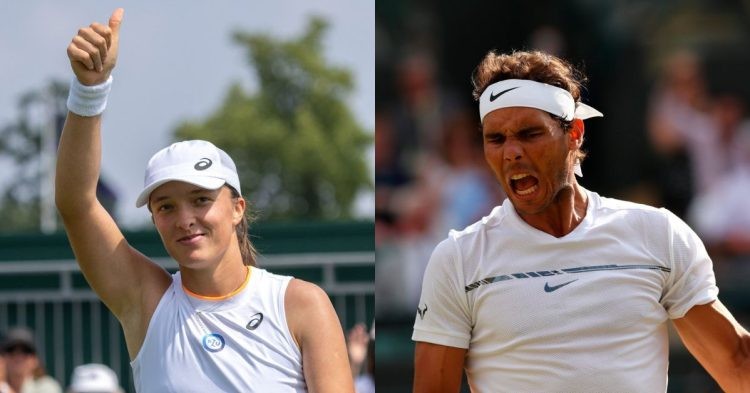 Iga Swiatek has been on a roll for quite some time now. She is currently on a winning streak and has remained unbeaten in 37 matches. During this time, she has managed to win the French Open and is aiming for her maiden Wimbledon title.

So far, she has played really well and has hardly faltered in the tournament. At the age of just 21, Swiatek has already won two grand slams (both French Open). She is the favorite to win the Wimbledon this year but has tight competition from players like Ons Jabeur, Coco Gauff, Angelique Kerber, etc.

#Nadal on #Swiatek: “I’ve texted him a couple of times because what he’s playing is crazy. The way she’s able to keep the focus and the winning spirit for so long is unbelievable. I like her a lot, she’s a breath of fresh air in the tennis world” #Wimbledon pic.twitter.com/4or5F2dKEO

While fans are in awe of her game, she is currently winning praise from one of tennis’ all-time great Rafael Nadal. Nadal showered praise on the world number one and revealed he texted her as well to express the same. Furthermore, the Spaniard said, “I texted her a couple of times because it’s unbelievable the way that she’s playing.”

Nadal is himself known for his mental toughness. However, he couldn’t help but praise Swiatek for being able to motivate herself for so long. He said, “It’s unbelievable the way that she’s able to hold the concentration and the winning spirit for such a long time. I think it’s something very difficult to make that happen.”

Rafael Nadal reveals why Iga Swiatek is winning all her matches

When Nadal was asked the reason behind Swiatek’s unbeaten run, he had an explanation for it. He said, “I think when she’s playing well, it’s very difficult to stop her because her shots are little bit different, with a lot of power.” Swiatek has already won the first two rounds in Wimbledon and is gearing up for the third round.

Moreover, he also praised her agility and ability for reaching the ball even when its tough. He said, “She’s able to move well. When she’s [playing] with confidence, I think she has shots that are very difficult to stop for the rest of the girls.”

Nadal feels Swiatek has brought fresh energy to the game of tennis. Furthermore, he said, “I like her. I think she has a very positive attitude, fresh air for the world of tennis.” He is extremely happy that someone like the Polish star is tasting the success she deserves.