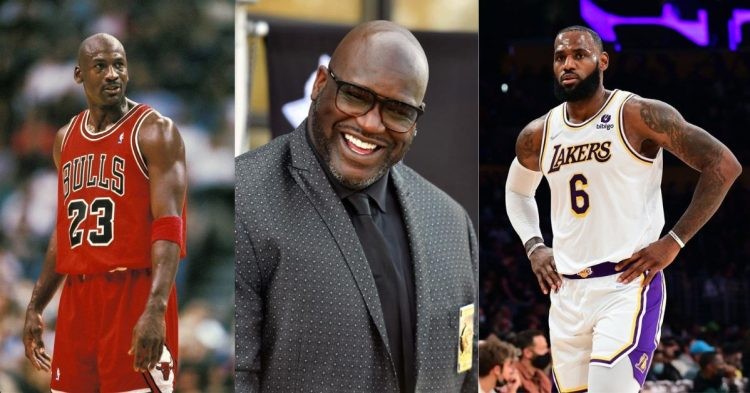 The NBA has seen many world-class players come and go. But the ones that remain in the conversation of the best aren’t many. The only two players to constantly come up will be Michael Jordan and LeBron James. Although they are players from two completely different eras, the NBA world still compares them to determine who is the best.

Many former players have had their say on the controversial debate. They use championships won, statistics, influence and impact on the game, and many more to see who has the edge over the other. This time around, an NBA great and a former champion has picked sides. It is none other than the one and only Shaquille O’Neal.

Shaq spoke about MJ and LeBron on the latest episode of Impaulsive. He said, “I think the greatest player is Michael Jordan. LeBron’s about to do something that hasn’t been done in a long time and I think he will move his name up there, but for me, it’s always Dr. J, Michael Jordan, Magic, and those guys. Jordan was the greatest, in my opinion. If he likes LeBron, that’s his opinion.”

“People look at stats, his stats are definitely going to be up there. To pass up Kareem Abdul-Jabbar, I can truthfully say, I’m jealous of that feat because I wanted to pass up Wilt. I was like 1500 points behind Wilt Chamberlain. I wanted to pass up Wilt Chamberlain because then I was going to arrogantly say, ‘I am the most dominant big man ever and I don’t want to hear anybody else’s name’,” Shaq also claimed.

As we all know, King James is not far from overtaking the great Kareem Abdul-Jabbar to become the all-time top scorer of the NBA. Recently, he also claimed brutally that he had no feelings and relationship with the legend. That being said, he only has to average 16-17 points per game this season to break that record.

Despite the possibility of that happening, Shaq thinks that nothing can beat His Airness’ legacy. Speaking of the man himself, he won 6 NBA titles, which included two famous 3-peats. As for LeBron, he has 4 rings, the most of any active player, other than the veteran Golden State Warriors players. It seems like according to O’Neal, the rings won do not determine who is the GOAT.

Other factors like impact and influence also play a part. But to make sure he doesn’t cause controversy, the 50-year-old mentioned it was just his opinion. In addition to that, he also claimed that he wanted to beat Wilt Chamberlain’s record of points as he was just shying off it by 1500 points to make sure he can call himself the “most dominant big man ever”. But O’Neal was not able to achieve this before retiring.