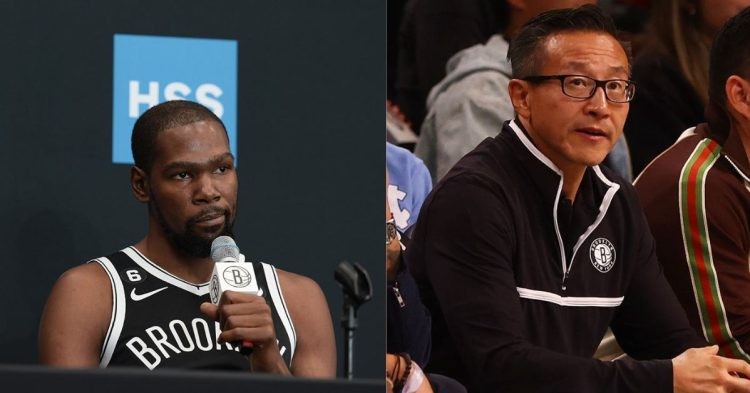 The 2022-23 NBA season is just around the corner as we near the opening night on October 18. As the offseason is coming to an end, we witnessed a long back-and-forth saga between Kevin Durant and the Brooklyn Nets organization. The entire NBA world watched as KD voiced his wish to leave the franchise no matter what.

As we all know, Durant submitted a trade request to leave Brooklyn. But as weeks passed, the Nets organization could not come to a final agreement with any of the teams interested in the player. That was when Durant gave a final ultimatum to the owner, Joe Tsai. He said he would leave the team if head coach Steve Nash and GM Sean Marks were not fired.

The decision shocked many, as no one expected KD to have that kind of power and authority within the organization. However, it turns out he did not have it after all. Joe Tsai publicly hinted that he would be taking Steve Nash’s side. Just a few days after this, the Brooklyn Nets issued a statement, mentioning they have worked it out with Durant to move forward into the 2022-23 NBA season.

Recently, the American finally let the world in on the real reason he wanted to leave. He said, “It was a lot of uncertainty around our team last year. I committed to this organization for 4 years last summer with the idea that we were gonna be playing with that group that we kinda went on that little round, went to the second round with.”

Will Kevin Durant and Kyrie Irving help the Brooklyn Nets win a championship next season?

“I felt like another year of that, us being healthy we were building something towards the future. So then as the season went on, you seen what happened with our season. Guys in and out of the lineup, injuries, just a lot of uncertainty which filled some doubt in my mind about the next 4 years of my career,” Durant added.

As he spoke about wanting to be on a championship contending team, he said, “I mean I’m getting older, I want to be in a place that’s stable and try to build a championship culture so I had some doubts about that. I voiced them to Joe (Tsai) and we move forward from there.”

As he said, Kevin Durant is getting older. At 33 years old, he doesn’t have many years left in the tank. That said, he is still one of the best players in the world. When a player has that kind of talent and skill, he will be looking to win the championship every day of the week.

KD also addressed the Nets’ not budging to any of the teams’ trade offers. They wanted star players and draft picks in return for their star players in Durant and Kyrie Irving. As he answered that he was not surprised that he was still a Nets player he said, “No. I know I’m that good that you’re not just going to give me away. I know who I am.”

It seems like both parties have put the summer saga behind them and are looking forward to the 2022-23 NBA season. With Ben Simmons also fit and healthy again, both KD and Kyrie will surely be eyeing the title.